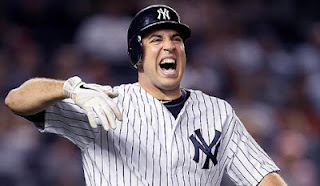 ** UPDATE 7:03AM Wednesday- According to Cash, Teix felt a "pop" in his wrist and will be shut down for at least two weeks.  Cash is reportedly "very concerned."  Not good. (Via Dan Barbarisi) **
Posted by Unknown at 4:10 PM No comments:

The other bit of news from this past weekend that I glossed over yesterday was Phil Hughes getting cleared to get out of the pool and back onto a baseball diamond.  He played a round of catch on Sunday, said his back felt fine, and should be back on his way to getting ready for the start of the regular season.

Now I don't know much about pool workouts or how they're supposed to help an athlete.  I don't know if working out in a pool for pretty much all of last week helped strengthen Hughes' back or was in any way helpful in his preparation for this season.  But I do know one thing that had to come out of Hughes spending all that time in a pool...

Nova's New Arm Angle Could Be The Key To His Success

Ivan Nova's first spring start this past weekend was everything you would want to see from a young pitcher coming off a bad year: he was efficient (27 pitches in 2 innings), his velocity was good, he was aggressive with his fastball, and most importantly, he located that fastball.  Nova threw 22 of his 27 pitches for strikes, the bulk of them 4-seamers, and drew praise from everybody for how well he commanded the pitch.

After the outing, it was revealed that Nova had been working on a new arm angle in the offseason, one designed to shorten up his release and make it easier to repeat.  Michael Eder of IIATMS/TYA examined the change in arm angle yesterday and provided a side-by-side GIF comparison to show just how much shorter Nova's arm motion was.  Based on the early results we saw on Saturday and the problems Nova had in 2012, this change in arm angle could be just what he needs to turn things around this season.