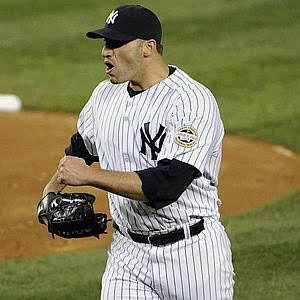 INDIANAPOLIS -- Andy Pettitte is staying with the New York Yankees, agreeing to an $11.75 million, one-year contract.

The deal Wednesday represents a raise for the 37-year-old left-hander, who made $10.5 million last season and helped the Yankees win their 27th World Series title.

Pettitte became the first pitcher to start and win the clincher in all three postseason rounds. After beating Minnesota and the Los Angeles Angels in the AL playoffs, he defeated the Philadelphia Phillies on three days' rest in the sixth and final game of the World Series, earning his fifth championship ring.

Pettitte's return doesn't mean the Yankees will end their pursuit of Roy Halladay. A baseball official with knowledge of the Yankees' plans told 1050 ESPN New York's Andrew Marchand the team is "still in on it" in regards to Halladay. (story courtesy of the Worldwide Leader)

While everybody else continues to analyze the Granderson trade that still hasn't been finalized (and still could get shut down pending Ian Kennedy's physical.  Let's not forget that the dude had a fucking aneurysm last season), I'll take time to congratulate the Yankees on a job well done in locking up the number one priority in their pecking order of their own free agents.

In case anybody has forgotten, he's what I wrote on November 20th regarding Pettitte:

Dude more than earned his $5.5 mil last season and as a reward should get a 1-year deal for $10-12 mil, 2 for 20 if he wants to pitch that much longer. His stuff obviously isn't going to get any better, but his ability to pitch and think on the mound has, and his pick-off move is still second to none. You see any better options for a #3 starter next year?

Wow, guess I hit that one on the head, huh?  For my next trick, watch me make this canary disappear.

People can say whatever they want about the Yanks still being in the Roy Halladay Sweepstakes, but the fact of the matter is they just gave up their best prospect for Granderson and getting Halladay is going to take at least 2 of the 3 of the Hughes-Joba-Montero sampler, which the Yanks would be nuts to give up.  So the inclusion of A-Jax for C-Grand pretty much cancels out Halladay and makes Pettitte an even bigger priority.  And what do the Yankees do?  They lock him up immediately after making the Granderson trade, doing exactly what I said they should do and giving Pettitte the fair, bigger money one-year deal that he should have got last offseason and more than earned with his performance this past season.

Sure he's old, but the numbers don't lie.  Andy Pettitte is still an above average Major League pitcher.  His ERA/WHIP/BAA numbers of 4.16/1.38/.259 were all below the AL average of 4.20/1.40/.266 and his K/9 of 6.86 was right in line with the league average.  Like I said in November, Andy's stuff isn't getting any better but his ability to pitch is.  He's got 2 above average off-speed pitches, a cutter he can work to both sides of the plate, and a fastball that he uses situationally to make it effective. How many pitchers can say they've got 4 effective pitches?  And how many teams can say they have a 3rd pitcher with these kind of numbers?

Before the Yankees started worrying about the 4th and 5th spots in the rotation, they had to lock up the 3rd spot.  And what better way to do that than to bring back a guy with a proven track record of success in New York who shows no signs of breaking down, steps his game up in clutch situations, and who costs you no more prospects or risky long-term contracts?  You can talk about your Roy Halladays and John Lackeys all you want, but I'll take Andy Pettitte as my 3-man every day of the fucking week.

For those scoring at home, that's now 2 great moves by Cash this week, with a 3rd waiting to be added to the tally sheet as soon as the 3-way trade is finalized, and it's still just Wednesday.  Someone do me a favor and hit the fucking music...

Posted by Unknown at 4:42 PM No comments: