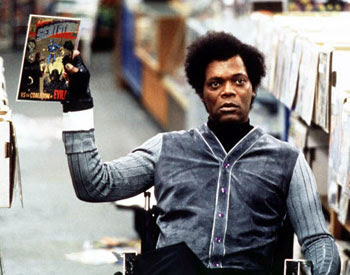 Well everybody said Nick Johnson was a question mark because of his checkered health history.  And today Nick didn't waste any time in taking the question mark, bolding it, and increasing it to size 72 font.

"Johnson felt something in his back during batting practice. He wore his spikes on the turf in the cage - he usually wears turf shoes - and a spike got caught during one of his swings. He said it's not a big deal and he would have played if this were the regular season. (courtesy of The LoHud Yankee Blog)"

Really, dude?  Spikes in the batting cage?  What kind of amateur hour crap is that?  And not only that, how the hell does something so small and insignificant end up causing you to hurt yourself?  And don't try to tell me that this was no big deal and a precautionary thing; when you have an injury history as extensive as Nick Johnson's, every hangnail and back tweak is a big deal.

Johnson is being counted on to produce this year; his high OBP makes him an ideal guy to hit in the 2-spot, even if he isn't the fleetest of foot, because it creates that many more opportunities for Teix and the A-Horse to drive in runs.  But if Johnson is going to have a year of strained backs, twisted ankles, and hurt wrists (something that was examined by Chris H at The Yankee U today), it creates a significant gap at the bottom of the Yankee lineup when C-Grand has to fill his spot in the 2-hole.  And even if Johnson toughs it out and plays through injuries like he said he would have today were it the regular season, history has shown he's not nearly as productive banged up as he is when he's healthy.

I sincerely hope this is exactly what Johnson said it was and that he's going to be back out there soon.  But don't think I'm not going to be spending the remainder of Spring Training cringing when I scan my blogroll or check texts from my uncle in Jersey, worrying that I'm getting the latest in Nick Johnson injury news.
Posted by Unknown at 5:33 PM No comments:

A Walk-Off Already? Why The F Not?

Well how do you like that? First game of Spring Training and already the magic is oozing out of the Yankees' pores.

The 3 dark horses combine for 6 innings of 1-hit, no-run ball, Brett Gardner makes a highlight-reel catch in the outfield, and just for shits and giggles the Yanks decide to add a little drama with a walk-off 3-run homer to win the game. Suffice it to say Colin Curtis was on Cloud 9 yesterday after that homer, even if he doesn't stand a chance of making the 25-man roster this season.

We'll spare the Frankie video for now, it being the first game of a long year and all. But everyone should still load up on whipped cream and start spreading the news...
Posted by Unknown at 9:19 AM No comments: