Allow me a quick minute to rant on something.

What the fuck is with all these reputable Yankee blogs hopping on this Derek Jeter in other teams' uniforms bullshit that the Beckett Blog did.  Now I never talk ill of LoHud and TYU and places like that, because I get a lot of my info and inspiration from those sites and I readily acknowledge that they are light years ahead of me in terms of quality.  But come the fuck on, guys!!  Really?  You're really going to get involved with this childish, cutesy pipe dream crap and direct Yankee fans to it like we're supposed to chuckle at it and pretend we're playing some kind of adult dress-up game?

I say FUCK THAT SHIT.  I don't want to see Derek Jeter in another uniform.  I don't want to even THINK about Derek Jeter in another uniform.  Is the guy possibly a year or 2 away from being completely washed up?  Possibly.  Is he completely delusional if he really thinks he should get $23-24 million per year in his next contract?  Probably.  But the fact of the matter is and always has been, Derek Jeter is a Yankee legend.  He's right up there with Ruth, Gehrig, DiMaggio, and Mantle.  And to even give the time of day to something even pretending to put him in another uniform spits in the face of the legacy he has created.  And if any fans of all these other teams actually gets enjoyment or hope out of this because they think they have a shot, then they can just go get fucked in the face because there's no chance in hell that Derek Jeter will be wearing anything other than his blue and white pinstriped jersey with the interlocking "NY" on the chest and the number 2 on the back.

I may not be happy with how Jeter and his agent have gone about these negotiations, but I never for one second thought or wrote about wanting the guy to leave.  He is a Yankee, always has been a Yankee, and always should be a Yankee.  And if I have to look at something like this again like it's a funny ha-ha little joke: 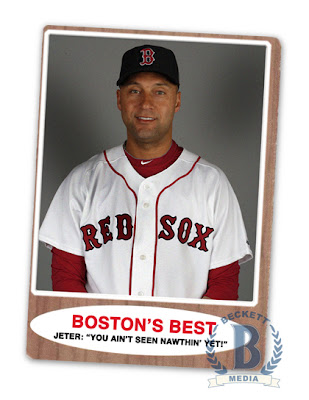 I swear to God I am going to find the first wheelchair-bound 10-year-old that I am 100% confident doesn't know any kind of martial arts and I am going to kick his ass out of anger.  And that goes double if he also happens to be a Red Sox fan.
Posted by Unknown at 3:46 PM 1 comment:

SOOOO Glad To Have This Guy Back 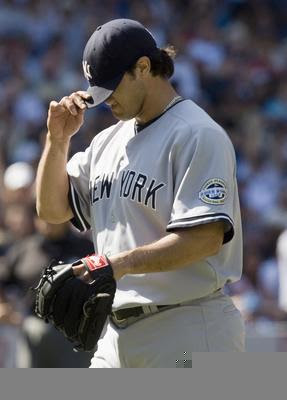 Who needs Cliff Lee or Zack Greinke or another bullpen arm when you can bring back Sergio Mitre, right?  I mean, any time you can bring back your 7th-8th, "super end of the world emergency" starter/ mop up bullpen scrub and his sparkling 4.81 K/9, that's a move you have to make 25 hours a day, 8 days a week.

The Yankees really thought it was worth bringing back The Serge instead of giving his innings to Romulo Sanchez, Ivan Nova, and then perhaps later in the season Brackman or Betances (fingers crossed)?  Oh well, at least I know Mitre won't be pitching any meaningful innings next year and I can feel better that the more useful arms in the 'pen won't have to be wasted in blowouts.
Posted by Unknown at 9:01 AM No comments: