Oh well, guess Joe's lineup tinkering didn't work out today.  After his typical shaky first inning when he was clearly too jacked up because he was pitching in Cali again, CC was magic.  But the Yanks couldn't muster enough offense off Dallas Braden to pick CC up.  I knew Joe messing with the lineup today was a bad idea.

Speaking of Dallas, somebody tell this kid to chill out.  Screaming at The Horse because he walked across the mound?

“I don’t care if I’m Cy Young or the 25th man on the roster, if I’ve got the ball in my hand and I’m on that mound, that’s my mound…. He ran across the pitcher’s mound foot on my rubber. No, not happening. We’re not the door mat anymore.”- Braden after the game.

Dude, it wasn't like you were going into your windup.  The fucking play was dead!!  And then to talk about how hard you throw and what you may or may not do the next time these 2 teams meet?  It's shit talking like that that will get your teeth kicked in by The Horse next time.  And then you won't even have to worry about who's walking on your mound because you'll be laying in the ICU.


P.S.- Calm down with the "We're not the door mat anymore" schtick, bro.  Look around you.  You play for the biggest penny pincher in baseball.  The Oakland A's exist to basically be every other team's farm system.  They horde good young talent and then trade it off for more good young talent when it gets too expensive.  Just calm down with the chest pounding, pitch decent over the next couple years and enjoy the new contract you get from some different team in free agency.
Posted by Unknown at 7:22 PM No comments:

Here's today's lineup for this afternoon's series finale against Oakland via LoHud:

Wow, well that's a new one, ain't it? To be honest, I love it. It's only 14 games into the season and Joe is already trying to fuck with people. If you don't think this lineup is a big D-X crotch chop to the rest of the AL then you are out of your mind.

Johnson at 1st and Teix DH'ing? Swish going from day off to batting 6th? Thames getting the 7-spot for C-Grand? Frankie and Gardy rounding out the bottom of the order? Come on now.

No offense to anybody, but this isn't even the B-lineup that's going out there today, it's somewhere between B- and C+. And I love it because it's Joe showing confidence in his pitcher, CC, and his team. He's basically telling everybody "yeah, I'm going to start fucking with the lineup and give people day's off that don't need it because I know we're still going to come out and beat you with whoever I decide to throw out there in whatever batting order I choose. And while we're at it, I'll just throw Nick Johnson and his giant mascot head out there at 1st base for shits and giggles."

Now if only Joe would show up in the dugout today wearing the championship belt. Now THAT would be badass!
Posted by Unknown at 12:52 PM No comments: 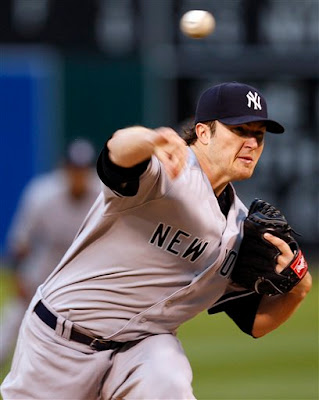 Our little boy is growing up.  Hughes is starting to think on the mound, recognize what his strengths and weaknesses are from outing to outing, and pitching to those strengths, and that is a scary thought for the rest of the AL.
Posted by Unknown at 9:00 AM No comments: