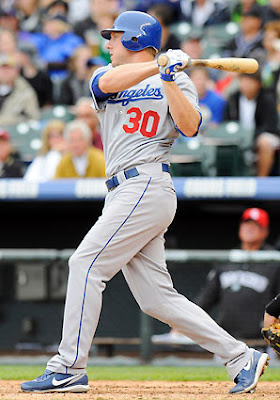 So The Hoff was let go today and now heads back to the Dodgers per the Rule 5 stipulations.  I guess a 3-23 performance will do that to you.  I mean, when Marcus Thames hits 3-28 and still gets picked over you, you know you didn't exactly put your best foot forward in Spring Training.  Christ, the guy didn't even do enough in Spring Training to get a fucking picture of himself in a Yankee uniform in Google Images; I had to use this one from the Dodgers.

I'd say this was a wasted trade on the part of the Yankees since they basically ended up with nothing.  But when ending up with nothing still means not having Brian Bruney in your bullpen or even on your roster, I'll take the good with the bad and call the deal even.

Apparently there's rumors going around that the Yanks are planning to swing a trade to bring Hoffmann back into the fold and then be able to stash him in Triple-A where he can be called upon if needed.  Call me crazy, but I don't see the benefit in giving up one of 2 pitchers who have shown themselves to be valuable at the Major League level this season (Mitre or Gaudin) for a player who wasn't even good enough to make the squad against the likes of Thames and Randy Winn.  With the number of decent performances the Yanks got from some of their young outfielders in Spring Training, they could probably find someone who could provide the same value as Hoffmann if somebody gets injured or Thames a/o Winn completely suck.

I know the Yankees have pitching depth to burn, but that still doesn't mean you just give it away for 42 cents on the dollar.  What's the rush?  Dumping Bruney is one thing, but if you're going to give up guys like Mitre or Gaudin, guys who have shown ability to contribute positively at the Major Leage level, you better damn well get something equally valuable in return.  I don't want to bag on Hoffmann, but he's just not equal value.
Posted by Unknown at 6:20 PM No comments: