David Ortiz Is Not Part Of The Roc-A-Fella Family 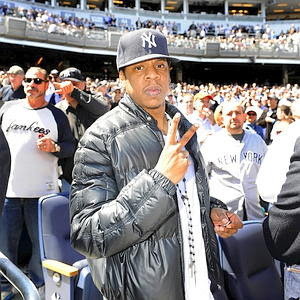 The hip-hop mogul and sports fan slapped Red Sox star David Ortiz with a $5 million-plus suit yesterday, claiming the Boston slugger apparently liked Jay-Z's 40/40 Club so much, he decided to open his own.

The Manhattan federal court filing accuses Ortiz and his sister, Albania Ortiz, of trademark infringement, unjust enrichment and "false designation of sponsorship" in connection with the "Forty Forty" nightclub they opened in the Dominican Republic last year.

The suit also charges them with "cybersquatting" for running a Spanish-language Web site at http://www.fortyforty.net/.

Court papers feature photos of Ortiz attending an All-Star Game party at the flagship 40/40 Club on West 25th Street in 2008. (courtesy of the NY Post)


For shame, Big Sloppi, for shame. It's bad enough that you're a cheater and now a crappy ballplayer, but stealing the name of Jay-Z's club to try to boost attendance at yours? That's just downright pathetic. And then when you throw in the "cybersquatting" charge, that's where I draw the line. Nobody fucks with Hova or the R.O.C., especially not on my watch.

On the one hand, I'd like to applaud you for your business savvy in recognizing that piggybacking on the name of a well-established, popular club will more than likely help bring in the clientele and cash you will need to support your fat ass after your baseball career ends, which could happen within the next 2-3 months with the way you're swinging the bat this season. But on the other hand, you are David Ortiz and you do play for the Boston Red Sox, so that trumps anything and I'm forced to tell you to S a D and bring up the fact that you're batting an embarrassing .154/.241/.269 this year with 0 home runs, 2 RBIs, and 13 Ks.

Why not try some of these names for your new club? "The .150/.240 Club;" "Big Papi's House 'O Juice;" or "2 Fucking Games."  Now THAT's some catchy shit right there.  People would be stretched around the block to get into those places.
Posted by Unknown at 2:47 PM No comments:

A Tip Of The Cap To You, Mr. Hughes 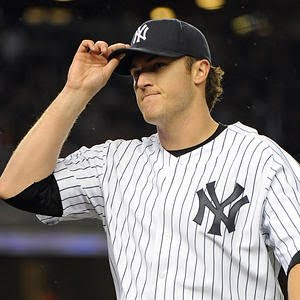 (Photo courtesy of Charles Wenzelberg/NY Post)
Let's take a look back at what I said I wanted to see from Phil Hughes before his start last night:

"But if he is aggressive towards batters, hits his spots with all his pitches, and shows enough confidence to try to work in his new changeup, I'll be happy with 5-6 innings and 3-4 ER allowed."

That's a yes, yes, and yes. A job well done by Hughes last night in his season debut. He pounded the zone, used all his pitches, and didn't get rattled after giving up an early homer to Godzilla. The 5 walks are more than you'd like to see, and that surely contributed to his high pitch count of 108 and exit after 5 innings, but Hughes did his best Andy Pettitte impression, bearing down and making pitches to get the outs he needed when he put runners on. That tells you more about a pitcher than pitching with nobody on, and for 23-year-old Hughes to be able to get the job done in those situations in his first start after transitioning back to the rotation, that bodes well for him and the team moving forward.

Just a quick side note, can everybody stop this talk about how Scott Kazmir is a Yankee nemesis? The guy beat them a couple times back when Tampa was still the Devil Rays and ever since they became relevant and he got shipped to LA, he's done nothing but get his dick knocked around by the Bombers time and time again. 8 hits, 3 walks, 6 ER in 4 innings? Are you kidding me? Go put your bullpen jacket on and sit in the clubhouse.


P.S.- ESPN can cut the "Yankee killer" stuff with Josh Beckett too while they're at it.
Posted by Unknown at 8:33 AM No comments: