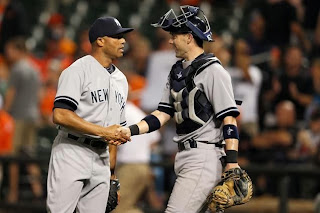 MLBTR's Arbitration Projections And Not Paying Too Much For Mediocrity

MLB Trade Rumors released their projected salaries for the Yankees' arbitration-eligible players yesterday.  While they are only projections, MLBTR has been pretty accurate with their numbers the past few years.  Typically these deals are an afterthought in Yankeeland, but with signs still pointing towards the $189 million luxury tax threshold being the main goal for them this offseason they become much more important.  Here's what MLBTR projected for the Yankees' 7 eligible players:

That's $17.2 million of potential salary added to next year's total, and when you're trying to cut costs on a team that already has almost $85 mil tied up in 6 players, that can make or break you.  The decision to offer arbitration or new deals to these players isn't as simple as it usually is for New York, and they need to be smart about these decisions.

Even when the season is over the Yankee organization can't escape injury problems.  At least that's what appears to be happening with Tyler Austin.  Josh Norris reported yesterday that he has been pulled out of the Arizona Fall League after playing in just 4 games.  Austin hasn't played in over a week, and based on his injury problems earlier in the year and now the decision to remove him from the fall league, it's only logical that a setback would be the cause.

You'll recall that Austin missed a large chunk of time due to a wrist injury and he was dinged up late in the 2012 season.  If this does indeed turn out to be health-related, and especially if it turns out to be a setback with his wrist, that's another bad look for the Yankee training/medical staff.  They've gotten burned a lot by rushing guys back before they were ready to play in both the Major and Minor Leagues and another setback to a top prospect makes them look even worse than they already do.  Hopefully this doesn't turn out to be something serious that could impact Austin's ability to start the 2014 season on time.