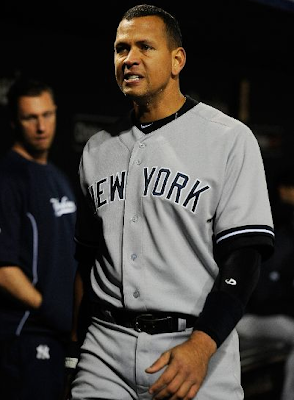 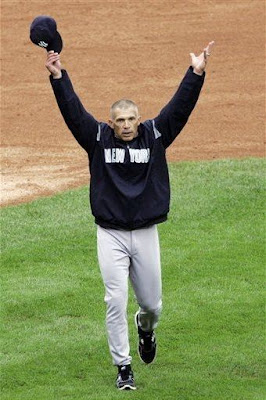 It’s no secret around AB4AR that I’m not a Joe Girardi guy. I wasn’t a Joe Torre guy either, and I will readily admit that I think Girardi does a much better job than his predecessor, but I’m still not a Joe Girardi guy. To be honest, I’m really not sure why I’m not. As someone who embraces all things statistical and sabermetric when it comes to baseball and writes for 2 analytical, stat-based Yankee blogs, I should be bowing at the altar of Joe and his bullpen binder, but I just don’t. There’s something about the way he manages that always leaves me thinking he made his move a little too early or a little too late, and I get very tired of his paint-by-numbers coachspeak when discussing players who are in a slump or stretches where the team as a whole isn’t playing good baseball. Why am I spelling all of this out right now? Because so far in the postseason, small 2-game sample size that it is, I’ve been a huge fan of the job Joe’s done.
Read more »
Posted by Unknown at 11:06 AM 2 comments: 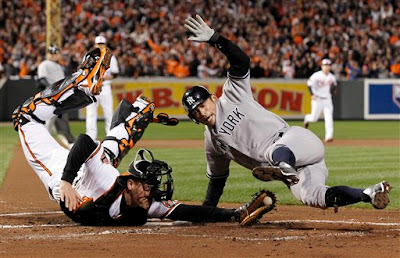 (Sadly, this was the highlight of the night for the Yankees and it happened in the 1st inning.  Courtesy of the AP)﻿

Game 1 was fantastic.  Just lovely.  The fact that the score was 2-2 heading into the 9th inning didn't even register with me because there was never a moment that I wasn't confident the Yankees were winning that game.  They thoroughly outplayed the Orioles in every facet of the game, and were it not for a couple of ill-timed base running gaffes, that game could have very well ended up a JV version of the Game 162 Massacre.  Anytime I can end a night not drunk as shit, angry as hell, and using multiple curse words in multiple continuous "Game Notes" bullet points, that's a good night for me.

Game 2 had a similar "advantage-Yankees" feel to it heading in.  The offense was facing a possibly gassed, definitely ineffective starter pitcher who they had already seen 4 times in the regular season, they were rolling out the man responsible for the most postseason wins in the history of baseball and a guy who lives for games like this, and they forced Buck to buck the trend (see what I did there?) and insert more lefties into his lineup against a left-handed starter in an attempt to give his offense a jump-start.

There was definitely a feeling of desperation in the air on the Orioles' side, and justifiably so.  Heading to New York down 0-2 is not a confidence-boosting scenario.  The Yankees needed to keep their focus and keep their intensity, not take a deep breath after getting 1 on the road, to really put some pressure on Baltimore.  They put pressure on, but the focus didn't seem to be all there in another frustrating, sloppily-played, boatload-of-opportunities-missed loss to even the series.