Well This Is A Slow Friday Night

Last week at this time we had top prospects getting shipped across the country, new pitchers being added to the rotation like it was going out of style, and potential DH targets being suggested by the dozen.  Tonight I'm sitting here with snow coming down outside and nothing going on in Yankeeland to occupy my time.  Well, unless you count the Gardner signing as big news.

Posted by Unknown at 7:35 PM No comments:

It's probably the fifth or sixth time I've used this headline, but it's been awhile since I've done the Friday linkaround, so F it.  Let's get to the links.

- Robbie Clark of Yanks Go Yard discusses the shift in Puerto Rico's international standing within MLB as it relates to a potential international draft.

- William of The Captain's Blog examines Michael Pineda's 2011 pitch selection and how it will serve him moving forward as he develops a change.

- Alex Geshwind of TYA breaks down both Michael Pineda's game and Cash's logic in making the move for Pineda.

- Chip Buck of IIATMS had this interview with Jim Callis a few days ago talking about the Yankee Minor League system.  If you somehow missed this, you should slap yourself.

- Also from IIATMS, Brien Jackson runs through the potential solutions to the current overcrowding issue with the rotation.  I'm a fan of any of his options that involve A.J. no longer being a Yankee.

- Delia E. of Yankees Fans Unite looks at the arbitration situations of the 3 remaining eligible players and decides whether Martin, Logan, and Gardner should take the deal or not.

- Stephen Rhoads of RAB predicts what the roster and payroll will look like heading into next offseason and how that will impact the Yankees' ability to sign Hamels a/o re-sign C-Grand.

-3460kuri of Pinstripe Alley uses run differential analysis to show why adding Pineda was more important than giving up Jesus.

-And if you were wondering what The Horse has been up to lately when he's not nailing Torrie Wilson, he talked to ESPNDeportes' Alvaro Morales about the upcoming season.  No word on whether or not the team will take his plan for a rotating DH into consideration.
Posted by Unknown at 1:07 PM No comments: 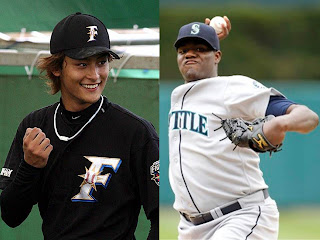 Yu Darvish is officially a Texas Ranger.  For a cool $112 million, the Rangers were able to plug the gap left by former ace C.J. Wilson jumping to the Angels.  And in the process they made the Yankees' pitching additions from last Friday look even better.

For what works out to approximately $18.667 million dollars per season after factoring in the contract and posting fee, the Yankees could have had Darvish's services.  He could have slotted in behind CC as the #2 starter, provided an upgrade over what the Yankees had in their rotation at the time, and given them another young pitcher around which they could build their rotation for the future over the next couple seasons.  He also would have left them with one rotation spot still being occupied by A.J. Burnett, and at that price tag seriously crippled the Yankees' plans to cut payroll for 2014, unless they let both Swish and C-Grand walk without making offers to them and stayed dormant on the FA and trade markets.

As it stands right now, the Yankees will pay Michael Pineda and Hiroki Kuroda about $10.4 million in 2012, significantly less than what Darvish will get from Texas, and lengthen their rotational depth in the process.  They'll do it without sacrificing their future payroll goals, and with Pineda being under team control for the next 5 years and coming off a stellar rookie year, the Yankees could stand to get production from him identical to, if not better than what Darvish will provide at a fraction of the cost.  Even Kuroda could come close to replicating Darvish in 2012 when you factor in all the adjustments that Darvish will have to make going from the Japanese game to the American game.

Darvish, for all his talents and impressive numbers, is an unknown commodity as a Major League pitcher.  Pineda and Kuroda are not.  And Pineda, at 2 years younger than Darvish, already has a very good Major League season under his belt.  His learning curve will presumably be shorter than that of Darvish.  If Pineda outperforms Darvish over the next 5 years, the decision by Cash to pass on Darvish and pursue this trade is going to look like a stroke of genius.  Even if he doesn't, it's reasonable to expect Pineda to come close to matching Darvish moving forward and at the drastically different dollar amounts that each will be making, that's still a great deal for the Yankees.

In the end, Darvish and the price tag tied to him didn't fit in with the Yankees' plans.  They went out and found a much cheaper alternative that could turn out to provide even better value.  And they lowered their risk by taking a chance on Major League players with Major League experience.  As much as they scouted Darvish, the Yankees had to have a very solid idea of what he is and could become as a pitcher and what that was worth to them.  And they decided that shelling out 9 figures for that kind of pitcher wasn't a wise investment.  When the alternative is adding 2 quality starters at significantly less money while still maintaining future roster and payroll flexibility, I would have to agree with that decision.
Posted by Unknown at 8:06 AM No comments: