Jeter Getting Beast Moded By Fastballs

It's been an ugly final season for The Captain to say the least.  While he has managed to stay almost completely healthy and on the field for the entirety, he's looked like an extremely weak and watered down version of the player he was as recently as 2 years ago.  Father Time has caught up to Derek Jeter in a big way and easiest way to see that is to look at how bad he's been against fastballs.  That's a topic that Mike Petriello of FanGraphs covered earlier today, and while I invite and encourage you to read the whole thing because it's great, the standout of the piece is this statement:

"In April, Jeter saw just 30.9 percent fastballs at or above 92. Since May 1, that’s jumped by 10 percent, and while there’s something to be said for the overall velocity of the sport tending to increase past April, the fact is simply this: Jeter can’t catch up to good fastballs any longer, and teams are increasingly taking advantage of it. It’s getting to the point than other than the occasional breaking ball just to keep him from timing it, you wonder why he’s ever not seeing fastballs."

There it is in a nutshell, folks.  The word is out that Jeter ain't what he used to be and pitchers are just dialing it up knowing that he can't do anything with it.  The signs have been there since April, when his solid start was almost entirely right field-focused, and they've been coming to the forefront ever since.  The Farewell Tour appears to be the priority for the Yankees over winning games, so whatever, maybe it's not that big a deal.  As long as that continues and Jeter stays in the 2-hole, the Yankee offense will continue to underperform because there's nothing to indicate he's going to turn this around.
Posted by Unknown at 1:00 PM No comments: 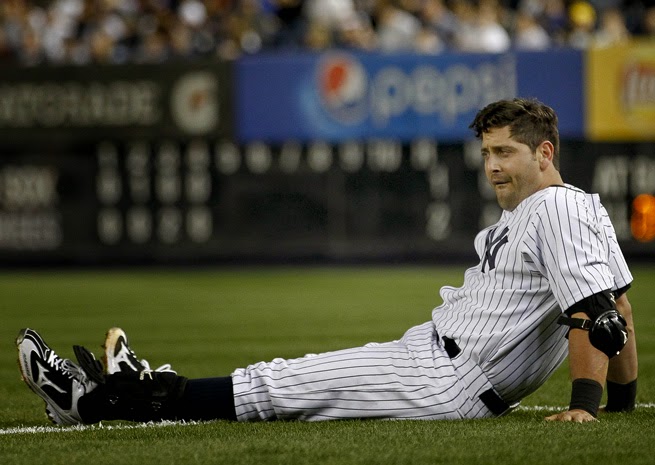 The weather didn't cooperate last night and the series finale against the Royals was rained out, leaving the Yankees in a position where they will lose another off-day later in the season.  Now they move onto Seattle for 3 games and here are the big things to come out of last night:

- The makeup date has been announced for August 25th.  That was supposed to be a travel day into Detroit and now the Yanks will stop off in KC again to wrap this one up before going to the Motor City.

- Joe has decided to keep his rotation in order, pushing Vidal Nuno back to tonight and Masahiro Tanaka to Wednesday.  By doing this, he throws off a potential big pitching matchup between former Japanese teammates Tanaka and Hisashi Iwakuma.  Oh well.

- Jacoby Ellsbury would have been held out of the lineup last night with a sore hip after hurting himself running the bases on Sunday.  He is expected to play today.

- Shawn Kelley threw a scoreless inning for SWB last night and the plan is still for him to rejoin the team on Wednesday.

- The recently DFA'd Alfredo Aceves accepted an outright assignment back to Triple-A, so I guess he's going to be around for a little while longer.  Yaaaayyyyy...