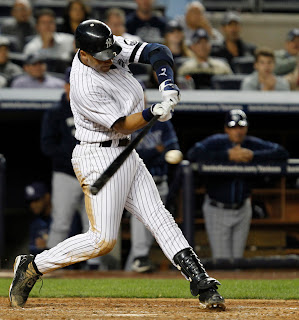 It was a continuation of his strong second half in 2011, but that didn't make Derek Jeter's offensive performance in 2012 any less impressive.  To be 2 years older than he was when he first started to look like he was slipping, the oldest everyday shortstop in MLB by far, and lead the American League in wOBA at his position (.347) while playing 159 games was just the latest entry in the long book of career accomplishments for Jeter.  His race to 3,000 hits in the rearview, Jeter rapidly ascended the all-time list last year and enters 2013 knocking on the door of the top 10, with it looking very likely that he'll finish the year just outside the top 5 if he stays healthy.  Health will play the biggest role in determining whether Jeter keeps the positive momentum from his 2012 season going, but before we look ahead to that, let's look back at 2012 and what changed to breathe life back into Jeter's bat.
Read more »
Posted by Unknown at 2:00 PM No comments:

Yanks Sign Another MiL OF; I'm Getting Bored Writing About Them

Boy the Yanks are really picking the bones of the Cleveland 40-man clean, huh?  Every casualty that gets cut to make room for a new signing pretty much has a Yankee MiL contract waiting for him when he finishes cleaning out his locker.  Maybe somebody should tell the front office that these moves don't make up for not offering Swish a contract.

The latest Quad-A warm body is Thomas Neal, a 25-year outfielder with a 7-year MiL career in 2 systems and 9 games of 2012 Major League service under his belt.  He had some pretty good years in the lower levels of the San Fran system, and even posted a .343 wOBA for their Triple-A affiliate in 2011.  But he got dropped back down to Double-A in Cleveland's system last year, so take that however you want to judge the guy's ceiling.  For what it's worth, he's got decent MiL numbers, good power, some speed, tolerable K and BB rates, and can play multiple positions.  Blah, blah, blah.

Diaz.  Canzler.  Neal.  Somehow I don't think these guys are going to be battling for a spot on Pinstriped Bible's Top 100 Yankees list.
Posted by Unknown at 7:08 AM 1 comment: