Joba Back Before The End Of The Month? 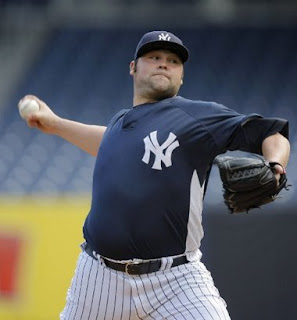 (Joba's rehab has been smooth sailing so far.  Courtesy of John Munson/The Star-Ledger)﻿

"The plan is for Chamberlain to throw a bullpen session Monday. The next test will have Chamberlain throw in back-to-back games. If he comes through that exercise with no problems, he could come off the disabled list before the end of July."

Joba's latest rehab outing was last night for High-A Tampa, and it was his first tough one.  He gave up a couple hits and an earned run, the first he's allowed since starting his rehab schedule, in 2 innings of work.  Reports of mid-to-high 90s speeds on the fastball have been consistent since his first outing, and there have been absolutely no reports of Joba feeling any kind of discomfort in his elbow or ankle, so assuming all goes well in this next week a return by the end of July isn't out of the cards.  But Joba does have until August 8th to complete his 30-day rehab assignment, and coming off of 2 serious injuries to his arm and leg is no joke.  I'd feel much more comfortable with the Yankees giving him more time than he needs to complete the assignment than just enough, current bullpen situation being what it is.
Posted by Unknown at 3:45 PM No comments:

Extra Base Hits Still A Problem For Nova

Ivan Nova's early-season extra base hit issues took a backseat to a lot of other storylines over the past 2 months, but they've still always been there and are starting to become more problematic again.  Nova gave up 4 doubles and 1 triple last night, and in his 4 July starts he has allowed 14 total XBH in 24.2 IP, accounting for 45.16% of the total hits Nova has given up this month.  Nova's very good at limiting damaged when he puts runners on, but it's hard to overcome that many XBH.

For the season, Nova is still the AL leader in XBH allowed with 64, and he's comfortably ahead of second place man James Shield (52).  Nova has only walked 7 batters this month, so he's clearly made strides in improving his control and has seen some positive results from it.  But his command of his stuff is still not a great strength, and Nova's ability to establish some consistency there and locate pitches better inside the strike zone is what will determine whether he can be more than a #4 starter.
Posted by Unknown at 10:40 AM No comments: 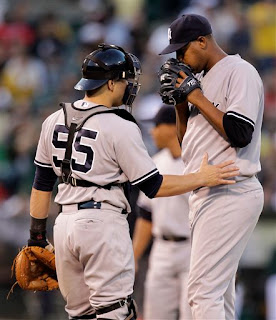 (Still too many extra base hits, Ivan.  Courtesy of The AP)﻿

I don't know if the Yankees left their bats in New York before making the trip out to Oakland or if Tommy Milone is really that good, but they didn't do a whole lot of damage again last night and lost another close game because of it.  Ivan Nova wasn't particularly sharp, but he did what he usually does and limited the damage to 2 runs to give his team a chance.  The Yankees just never mustered up enough offense to support him and ended up losing on a walk-off single in the 9th after coming back to tie the game at 2.

- Nova loaded the bases in the bottom of the 1st but managed to escape without allowing a run.  He gave up 1 in the 3rd on a triple and a sac fly and another in the 4th on an RBI double by Brandon Inge.

- The Yankee offense didn't get a runner to second base until the top of the 6th when Derek Jeter and Mark Teixeira singled.  Teix was thrown out trying to go first to third in the 4th inning, and Milone was just dominating the Yankees with his changeup.

- 6.2 innings of 2-run ball isn't terrible, but Nova struggled with his command in the strike zone all day, and the A's pounded him when he did.  5 of the 9 hits he gave up went for extra bases.

- Nick Swisher left the game after running out a ground ball in the 7th inning.  It looked like it was his pesky groin again, but postgame it was revealed to be a left hip flexor.  Doubt we'll see him for the rest of the series.

- Milone exited after 7 innings and 10 strikeouts, and the Yankees were finally able to put some runs on the board.  Russell Martin hit a solo HR to lead off the 8th inning and Robinson Cano hit one to lead off the 9th and it was a 2-2 game.

- With the game tied, Joe decided not to go with Soriano in the 9th and it cost him.  Cody Eppley came in after Clay Rapada got a strikeout and gave up 3 consecutive singles to allow the winning run to score.

- The Yankees' streak of consecutive games with at least 3 runs was broken at 43.