We Got A Situation 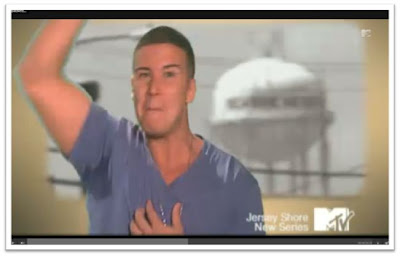 Throw on your Ed Hardy t-shirts and start fist pumping, bitches, because it's Jersey Shore week here at AB4AR!!

What does that mean, you ask?  Well for starters, it doesn't mean that I'm going to have Pauly D and Ronnie doing guest posts on the Yankees bullpen or inviting Snooki and J-Woww to comment on the possible Yankees playoff roster.

No, nothing quite that bad.  My family is making our yearly trip down to Long Beach Island, New Jersey, and with the benefit of modern technology (and a buddy in the IT department at work) my computer will be coming with me for the trip along with a portable internet source.  I've got a week in the tri-state area, which means a week of access to the YES Network on a week where the Yankees play every day so being able to stay on top of the events as they happen was a must.  My dedication to providing you, dear readers, with subpar, low-brow, profanity-laced analysis of the Bombers will continue even while I'm on vacation.

The only thing that could throw a monkey wrench into this is the availability of Sprint service down at the shore.  I have faith that there will be enough, but if not, then you won't be getting anything here for a week.  I know that's going to be hard to deal with, but you'll survive.  Just say a prayer for me and my air card and if things don't work out, make some Ron Ron Juice, stay away from the grenades, and I'll catch you back here on the 23rd.
Posted by Unknown at 8:04 PM No comments:

Not too much to complain about after another win in a tough weather setting last night.  The offense did enough to get the job done, and CC was better than his high hit total suggests against the bloop-happy Royals.

The only problem I have with last night's game was CC even coming out for the 9th inning.  Yeah, it's nice to get a complete game and yeah, his pitch count wasn't that high, but it was about 14,000 degrees out there last night.  Why even put him in that situation to add extra stress and work on his body when you don't have to?

Joe said “We don’t want to wear this big guy down" when asked after the game why he took CC out with just one out remaining.  Well if that's the case, then tell him he's done after 8 and let him rehydrate while D-Rob finishes the thing off.  110 pitches is nothing for a horse like CC, but 110 pitches in 106 heat index weather is different than 110 pitches on a regular day.  He gave up 2 hits in the 9th, so it was clear he was tiring a bit.  Let him leave the game with just 1 run allowed, bring in D-Rob with a clean slate, and don't even give the tying run a chance to come to the plate like it did last night.

I'm sure CC was fine and wanted to go back out and finish it up, but when outfielders on both teams are getting taken out of the game left and right because of the heat, Joe should have been smart, told CC he was done, and not let the game get as close as it did.  CC didn't deserve to have 2 runs tacked onto his total last night, and if Joe goes to his 'pen to start the 9th last night instead of bringing D-Rob in with runners on, he probably doesn't.  There's bigger fish to fry here then a complete game against the Royals, Joe, and you've already got injury problems in your rotation.  Sit the big guy, let him rest and drink some more Gatorade, and think about October.
Posted by Unknown at 9:28 AM No comments: