Despite being the most significant non-returning player signing of the offseason, the Yankees didn't bring Kevin Youkilis in with high expectations.  His eroding offensive skills and 1-year deal pointed to him being nothing more than a plug-in at third base, a regressing, broken down former All Star brought in to temporarily replace the regressing, broken down former All Star the Yankees already had at third in A-Rod. As the everyday third baseman for the first half of the season, the Yanks would probably hit Youkilis 6th or 7th against right-handed pitchers, 2nd against lefties, and through a combination of walks and the occasional HR here and there get enough production out of him to help keep the offense going until A-Rod returned in July.

That plan quickly fell apart with the injuries to Curtis Granderson and Mark Teixeira, and got thrown further out of whack with the recovery setback to Derek Jeter's ankle.  Youkilis now finds himself as the #1 right-handed bat in the lineup and arguably the second-biggest power/run-producing threat in the middle of the Yankee batting order.  For at least the first month of the regular season, the Yankees are no longer looking at Youkilis as a cog on the offensive wheel; they need him to be one of the pedalers that keeps the wheel moving.  Youkilis had a very good and surprisingly powerful Spring Training.  How well he manages to keep that performance up on an everyday basis could be a major determining factor in the Yankees' ability to keep the ship afloat while their walking wounded recover. 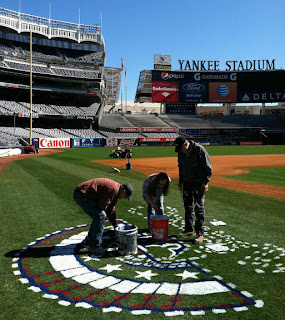 (Courtesy of the Yankees' PR team)

Welp, here goes nothing.  If nothing else, today's Opening Day game should be interesting.  The Yankees' recent roster moves and decision making when it comes to them can be questioned at a later date.  All that matters right now is the return of Yankee baseball to our everyday lives!  And what better way to commemorate the start of the 2013 season than with a good old-fashioned AB4AR live blog?

It doesn't come with quite the sizzle as it usually does, but Yankees-Fraud Sawx is still the premiere rivalry in MLB and a perfect way to really kick off the start of the season.  The lines are painted, the house should be packed, Sweet Lou is throwing out the first pitch, and the beer is cold.  Here's today's starting lineup for the Yankees:

And on the mound, making his fifth consecutive Opening Day start, CC Sabathia.  He'll square off against fellow lefty Jon Lester, with first pitch scheduled for 1:08 PM Eastern/12:08 PM Central.  Live blog will start sometime before then, likely around 11:30-11:45 my time when I get home from the office and get settled in.  If you're unlucky enough to not be at The Stadium and stuck at work, keep the "refresh" button handy and join in the fun.

Platoons were going to be a part of the Yankee lineup decision-making process one way or another this season.  They've become an even bigger part for the month of April as Cash has signed or traded for a variety of platoon-worthy players to fill in for the injured everyday guys.  Whether the collection of new players has regular or reverse platoon splits, the fact that other teams were willing to give them up already gives insight into their offensive production potential.  All the Yankees are really trying to do in this first month is find a formula to get the most out of those players' potential, including the ones we already know need a platoon partner, and score enough wins to support their strong pitching.  Now that we know who's on the Opening Day roster, let's take a quick look at the two versions of the starting lineup we're likely to see.

It's here.  It's finally here.