Mo Had 'Em Right Where He Wanted 'Em

You really have to just stand back and marvel at what Mariano Rivera did out there today.  After legitimately blowing the save on Friday night even though he reduced Miguel Cabrera to basically hitting on one leg, Mo had another chance to lock down a game win and a series win in the process this afternoon.  Instead of being the typical closer and just getting the job done, Mo graciously decided to pass the torch to his teammate Brett Gardner in the bottom of the 9th.

Gardner came through with the game-winning hit Friday night to bail Mo out and get him the W to replace the save.  In the selfless, giving fashion that has become so typical for him, Rivera decided that repaying the favor was more important than adding another save to his record-setting total.  He also gave Gardner the chance to prove that Friday night was no fluke instance of BABIP luck.  Mo grooved a couple pitches to Miggy and Victor Martinez that he knew they would hit for homers to tie the game, then shut down the rest of the inning to set things up for Gardner in the 9th.  Gardy made the most of the opportunity, yard jobbing one for another walk-off win.  Mo sets 'em up, Brett knocks 'em down.

Mo ended up with another win today, so I guess we'll have to see how he plans on repaying Gardner the next time he comes in to close a game, but once again you just tip your cap and shake your head at how painfully professional Mariano Rivera is.  Hard to find a teammate this great.
Posted by Unknown at 5:14 PM No comments: 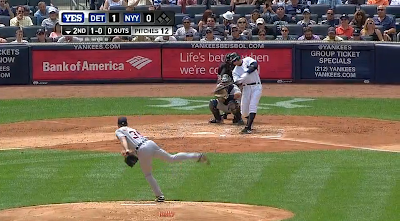 P.S.- Certainly sounded like a lot more cheers than boos when that ball went over the fence.  Maybe there aren't as many Yankee fans out there drinking the MSM anti-A-Rod Kool-Aid as I thought.
Posted by Unknown at 3:14 PM No comments: 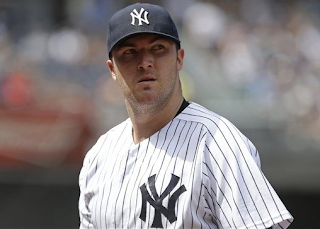 The Yankees managed to halt their growing losing streak, end the Tigers' winning streak, and keep their heads above .500 water all in the same game on Friday night.  What's more, they managed to do it despite another sluggish offensive game and a second consecutive Mariano Rivera blown save.  If there were any thoughts of building a new winning streak and securing a series win against the AL Central leaders, they were put to bed early on Saturday afternoon with Phil Hughes on the mound.  He was his usual self, the Detroit hitters were on their game, and the Yanks went down in a one-sided loss.

- Hughes was in trouble right off the bat with an Austin Jackson leadoff triple.  He scored on a Torii Hunter sac fly and Detroit quickly had a lead they would never give back.

- Hughes managed to strike out the second in the 2nd around a pair of singles, then gave up a solo home run to Miguel Cabrera in the 3rd to make it 2-0.  Cabrera was locked into Hughes' fastball from the start and in typical Hughes fashion, Phil stubbornly continued to throw them.

- Things got out of hand in the top of the 5th, when Hughes gave up another solo bomb to Jackson, a single to Hunter, and got the hook after just 4.1 innings.  Preston Claiborne relieved him and gave up 3 more runs on 2 more hits to make it a 6-0 game.

- The lone source of legitimate Yankee offense came in the bottom half of the 5th thanks to Lyle Overbay.  He drove in Eduardo Nunez with a home run on a hanging 2-strike slider to get New York on the board.

- They would get no closer than 6-2, however, as Claiborne put 2 more runners on in the 6th before giving way to Joba Chamberlain, who proceeded to bring everybody home on a 3-run HR by Hunter.

- Overbay tacked on a meaningless RBI single in the bottom of the 9th, a perfectly insignificant end to a pretty thorough beatdown.  The 3-6 spots ahead of him in the lineup went just 2-15 with 0 RBI and 5 K.