Dave Robertson gets righties out and he gets lefties out.  Power hitters don't bother him and neither do slap hitters.  He can come in to start an inning and plow 1-2-3 through the heart of another team's order or he can enter mid-inning with the bases loaded and nobody out and not even break a sweat as he works out of the jam without allowing a run.  Hitters are pretty much no match for The Fireman.

Cardboard boxes, on the other hand, are a different story.  Especially those sonofabitch empty ones.

Thanks to them, D-Rob could be on the shelf for some time after his MRI turned up enough to be a "cause for concern" according to Joe Girardi.  Robertson said he doesn't expect to miss a lot of time, but the Yankees have scheduled a CT scan and a weight-bearing X-ray as a follow up, and there's already talk of him not being available for Opening Day.

Sounds like Spring Training just became more important for every reliever in camp.
Posted by Unknown at 5:00 PM No comments: 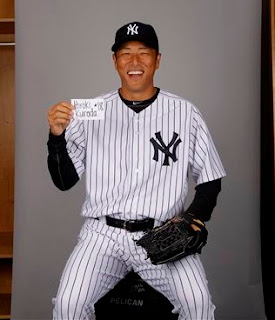 (Pictured: Not Kei Igawa.  Courtesy of The AP)

Normally I leave the guys at The Post alone when it comes to their Yankee coverage. I've found that they don't usually get swept up in the MSM nonsense that good old Wally and friends over at ESPN NY thrive on. That's not the case today for Kevin Kernan, whose piece on Hiroki Kuroda's first Spring Training start reeks of "screw it, I've got nothing good to write about. Might as well try to create false panic amongst the Yankee fanbase for no reason." Come on, Kev. That's not right.

Actually, he was Hiroki Kuroda. And I don't think comparing him to a guy with a 4.24/4.23/.4.67 career tripleslash is a good way to express how well he pitched in the first inning.

"The second inning he was Kei Igawa."

No, he was Hiroki Kuroda. And that comparison is even worse. They don't even pitch with the same hand!

"Welcome to the AL East."

Or at least the watered down early-March version of it where you face a Rays lineup comprised of only about a third of their everyday players. Gotta watch out for the Jeff Keppingers and Jesus Felicianos of the world.

"Japanese pitchers have had their troubles pitching in the major leagues, but going from the Far East to the AL East is the most difficult transition of them all."

"Never forget the purpose of spring training is to work on your stuff and not get hurt."

Which is exactly what Kuroda did yesterday in his two innings of work, thus making everything else written before that sentence completely meaningless.

Then what the fuck are you talking about comparing him to Kei Igawa?!?

"... but he is going to have [to have] everything working to come up big in the AL East. There is no room for error in this division."

None. Never mind the fact that Kuroda, and every other pitcher, has 8 guys on the field with him at all times playing defense to help make up for errors he might make in location or pitch selection. If you make one error in the AL East, you DIE!!!

"Kuroda is one of those pitchers who needs all of spring training to get his act together ... "

Him and most every other pitcher who participates in his team's ST activities. That's kind of why Spring Training exists.

“'It’s always important to leave with good results, but at the same time I wanted to work on my pitches and I wanted to make sure I had all my pitches, and I was able to accomplish that today,' Kuroda said."

Good. That's all that matters.

"At this point, all Hiroki Kuroda has to prove is that he’s not Kei Igawa."

NO HE DOESN'T, YOU FUCKING IDIOT!!! Hiroki Kuroda has never been compared to Kei Igawa by anybody and he never should be. He's already proven that he's not with what he's done in his career and there's no reason to expect him to regress to Igawa's level of ineffectiveness now. The Yankees never would have signed him if they thought he was going to be another Kei Igawa. Stop using flawed logic and shoddy comparisons to create controversy that doesn't exist!

Alex Rodriguez's home run off of Roy Halladay this past Sunday, meaningless as it seemed from a statistical standpoint, was actually more important than you might think because of the swing he took to hit it.  It was a compact, balanced, fluid swing that drove the ball to the opposite field with power, and in terms of the eye test it passed with flying colors as it represented a part of A-Rod's game that has become increasingly absent over the past four seasons.  As he's dealt with his litany of injuries, A-Rod has struggled with his swing mechanics, likely compensating for whatever was ailing him at the time.  As a result, his effectiveness as a hitter has been seriously compromised, most noticeably his ability to hit to the opposite field with authority.  Whether it's been the hip, knee, or groin, Alex hasn't had the same lower body torque and fluid rotation in his swing that he showed on Sunday, and that lack of lower body drive has sapped him of his opposite-field potency.

2007 was the high water mark for Alex in a Yankee uniform from a statistical standpoint (.314/.422/.645, .449 wOBA, 178 wRC+), and sometimes it feels like that was eons ago after watching the past four seasons of injury problems and declining production play out. 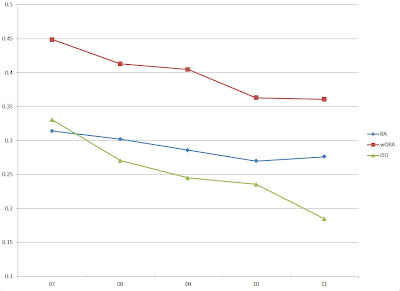 While it's perfectly normal for a 36-year-old professional baseball player to experience some level of age-related decline, it is the dramatic drop in power that is most concerning with Alex and that raises a red flag that his injury problems are also negatively affecting his performance.  That same drastic decline in overall production and power is present in A-Rod's opposite field splits since 2007.  It speaks to the problems that A-Rod's injuries have caused with his swing and where in his swing they are doing the most damage. 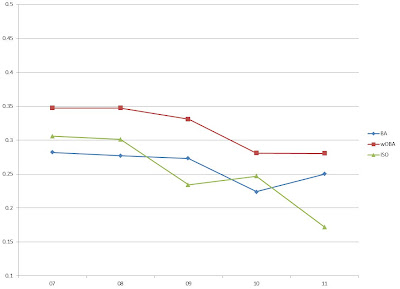 It's one thing to lose some bat speed and strength and not be able to muscle the ball all over the yard to the tune of a wOBA in the .400s when you get to your mid-30s.  It's quite another to drop off to the point of being below average when hitting the ball the other way, and that's where Rodriguez finds himself after posting back-to-back sub-.300 wOBA values in 2010 and 2011.  This past season, he bottomed out at .280, with a .664 OPS and 69 wRC+.  Remember, this isn't some schmuck third baseman here, this is Alex Rodriguez, the same guy who was the greatest baseball player on the planet for a period of time not too long ago.  Home runs like the one he hit off of Halladay used to be common place for him.  Now they're such a rare occurrence that they inspire blog posts like this one.  It is these types of home runs and line drive hits to right field that need to return to A-Rod's offensive game to help stifle the disturbing downward trend we're seeing in his production. 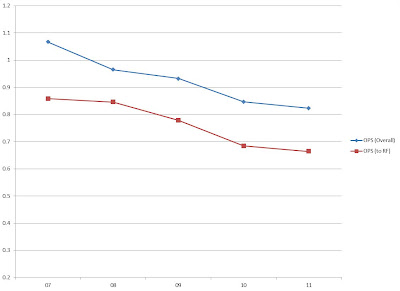 It's easy to forget just how great a hitter A-Rod was and still can be when he's 100% because of how bad he's looked at times when playing through his recent injuries.  Part of what made Rodriguez such an offensive force in his prime was his ability to hit to all fields and hit to all fields with power.  He was, and still is, a more dangerous hitter to the pull side and up the middle; that's where A-Rod makes his living.  But he's always had the ability to muscle a pitch out over the right field fence like he did on Sunday thanks to the power he generates in his swing with his lower half, no matter where the pitch was thrown.  That's what Alex has been losing most over the past few seasons as he's battled injuries, and that's what he needs to regain this year if he can stay right physically.
Posted by Unknown at 8:30 AM No comments: