Before Spring Training started, I wrote this post on the potentially problematic position the Yankees found themselves in with respect to their outfield depth.  The combination of returning Major Leaguers, free agent signings, and prospect promotions had left them with too many able-bodied outfielders and not enough playing time for each.  Too much depth at any one position is always a better problem to have than not enough, and the Yankees owed it to themselves to investigate every possible outfield candidate to strengthen their platoon-heavy bench this season.  They also owed it to themselves to make sure that their best OF prospects were getting regular playing time at the appropriate level, and this is where the problem could have started. 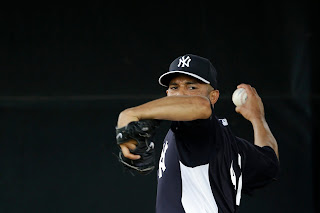 While the AB4AR jinx worked to perfection on Tuesday and pretty much every guy I name dropped in my bullpen post pitched like crap, the one positive bullpen appearance was that of Boone Logan.  It was his first game action of the spring and he looked pretty damn good, pitching a scoreless frame and striking out two of the four lefties he faced.  On the field he looked money, but his response to questions about how his left elbow felt after the game didn't fill me with the same confidence:

“It feels good, period. It really does. I promise."

It's been a while since I've had to use the "I promise" line on people, probably because I'm still single and haven't had to lie to a girlfriend in years.  But I can tell you from experience that when you're throwing out "I promise" as support that what you're saying is true, that's usually not a good thing.  We've got no choice but to take Logan at his word right now, but he sounds like a guy that would cave under cross-examination to me.