- No Yankee starting pitcher this season has a HR/FB% below 11.1%.  The one that does is David Phelps, and he only started 2 games.

- Even with a couple of hits today, the offense is still just 5-55 with RISP over the past 7 games.

It's pretty simple.  When your pitchers are giving up too many home runs and extra bases hits in untimely situations and your hitters aren't hitting enough extra base hits in timely situations, you aren't going to win a lot of baseball games.
Posted by Unknown at 5:14 PM No comments: 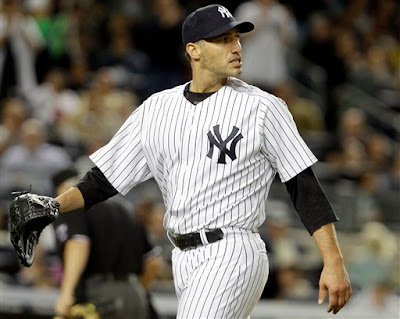 I, like many others, had my concerns about how Andy Pettitte would hold up to pitching in the Majors after a year away.  He was very effective in his final 2 seasons as a Yankee, but not the dominant pitcher he was at times in his prime.  Last night was like a blast back to 2000.  Andy was simply brilliant, no other way to describe it.  No matter what happens from here on out, there's no doubt that Andy can still do this.

- Andy came out firing in the 1st inning, and would have struck out the side if defensive specialist Chris Stewart would have caught strike 3 to Zack Cozart.  As it was, Pettitte managed to get 4 outs in the 1st and looked damn good doing out.

- The 3 strikeouts were good news, but the better news was that they weren't just a mirage.  Andy was legitimately "on" last night, probably the best he's looked since he started pitching again.  He had all his pitches working, he mixed them incredibly well, and kept the ball down in the zone.  The Reds have some good hitters in their lineup and Andy made them all look foolish.

- The monster starting pitching performance didn't do much to wake up the Yankee offense, though.  Through their first 5 innings, they managed only 1 run to support Andy, scratched across in the 4th inning when Alex Rodriguez led off with a double and scored on a groundout.

- Andy was absolutely incredible last night.  He worked 8 innings, didn't allow a run, allowed 4 hits, walked just 1 batter, and got 16 of his 24 outs either via strikeout or groundout.  Of his 9 Ks, 8 of them were swinging.  We've seen a lot of vintage Jeter this season.  Last night was vintage Pettitte.

- At long last, the offense finally came through when they needed to!  Bottom of the 8th, 2 outs, Robbie Cano CRANKED a HR to right, A-Rod singled, Ibanez homered, and a slim 1-0 lead became a comfortable 4-0 lead.  Bronson Arroyo had been cruising up to that point, but he hit the wall fast and hard.

- Little surprising to not see Soriano out for the 9th, even though it wasn't a save situation, but new setup man Boone Logan sat the Reds down in order to finish Andy's gem and get the Yanks back into the win column.