How To Handle Hughes

Since this morning's announcement, plenty of other sites have touched on the possible Hughes Rules to come this year.  Given his workload over the past few years and how they handled Joba last season, it's guaranteed that Hughes is going to be on some sort of innings limitation.  Here's 3 ways that Joel Sherman thinks they should do it:

1. Barring a rainout, the Yankees do not need a fifth starter until April 17, the 11th game of the year. So the Yankees can option Hughes to the minors until then, where it will be less controversial if they limit Hughes to a couple of prescribed, four-inning starts. At the same time, while their veteran starters also are still building up arm strength and stamina, the Yankees could add an eighth reliever, probably a second lefty in Boone Logan.

2. Again barring a rainout, the Yankees have every Monday in April off. That means they need a fifth starter just twice. So they can option Hughes to the minors for a month and use either Alfredo Aceves or Sergio Mitre to start those two games.

3. This is the one the Yankees seem to be leaning toward most: Limit Hughes to four-inning starts early, and take advantage that Aceves and Mitre are both stretched out, so one of them could back up those starts. Heck, even Chamberlain is stretched out and can give the Yankees some extra innings early, and Chan Ho Park has starting in his background and can give multiple innings early, as well. (courtesy of the NY Post)

I can kind of see where Sherman is going with this, and I agree with the foundation of his logic that because the Yankees have a favorable schedule to help work with Hughes' innings limit they should use it.  But the concept of sending Hughes to the Minors to throw limited innings after he just won the competition for the 5th starter role on the Major League team is completely insane.  If they are planning on sending him, or Joba for that matter, to the Minors then what the fuck was the point in holding this Spring Training competition?

Innings limit or no innings limit, the goal this season is still to win the World Series and in going with that goal, part of the strategy is to have your 12 best pitchers on your Major League roster.  Phil Hughes has shown himself to be well in that group of the 12 best pitchers in camp, so to immediately send him to Triple-A to pitch essentially weakens the Yankee roster along with de-valuing the work Hughes did through Spring Training.  Sherman mentions possible controversy over Hughes being limited pitching the Majors.  If you ask me, I would say it's more controversial to have a guy who was deemed by his team to be a Major League-level starter pitching in the Minors.  But that's just me.

Sure his changeup got rave reviews in Spring Training, but Hughes is still perfecting it and still learning how to effectively utilize all his pitches at the Major League level.  People need to remember that this kid has less than a season's worth of career starts in the Majors and needs to get as much experience as possible so he can continue to become a more valuable member of the staff this year and moving into the future.  To send Hughes to Triple-A just for the sake of controvery over innings is like putting an AP high school student into a 7th-grade English class; sure he's going to do well and get awesome grades, but he isn't going to learn anything.  You'd be better served sending the kid to take a college course so he can be challenged and learn from his mistakes.  The Majors are the challenging college course that Hughes needs.

As far as what Hughes' limit should be, I would set it at 160-170 innings, a reasonable extension of last year's innings total.  Some are saying because he has thrown 146 innings before he should have his limit this season based on that.  Those 146 innings were thrown in 2006 and since then Hughes has dealt with a handful of various injuries and being transitioned from the rotation to the bullpen.  And he's still just 23 years old, an age where most young pitchers are still being stretched out as far as innings goes, so the smart move is to be conservative and keep his innings extension in line with last season.  I would even take it a step further and focus more on pitch limits than innings limits.  A guy can throw 50 pitches and put more stress on his arm than a guy who throws 100, depending on what kind of pitches he's throwing and how much torque and OOMPH! he's putting into his delivery.  But again that's just me.

With the depth and talent they have in their bullpen, the Yankees can afford to let Hughes start out slow and get his 4-5-inning outings out of the way early so that he can be stretched out and pitching to his max level by the time the postseason rolls around.  Aceves and Mitre can both work as long men to handle Hughes' early outings, and with the group of Marte, Joba, Park, Robertson, and Mo, the Yankees can shorten the game even more to mask the effects of Hughes' short outings and do so without overworking anybody.  Not to mention that the Yanks still have Mark Melancon, Boone Logan, Royce Ring, and Jonathan Albaladejo in the Minors to come up and fill a spot if needed.  They are more than well equipped to handle The Hughes Rules.

And just because the Yankees don't "need" a 5th starter because of the schedule doesn't mean they shouldn't use one.  Sherman states in his 1st scenario that the other Yankee starters will still be building up their strength at the beginning of the year.  Don't you think they will welcome getting an extra day of rest as they're still trying to work the kinks out and get fully ready?  I know Andy Pettitte's creaky old left arm certainly would.  Pitching the regular 5-man rotation is just as beneficial to the entire staff as having an extra reliever is, but substituting that reliever for Hughes is worse for Hughes and the staff as a whole.

So the only logical thing to do, in the interest of winning and monitoring Hughes, is to let Hughes pitch as the 5th starter in the spot that he was given by Joe.  Limit him early on, maybe the first month, month and a half, work the bullpen schedule around him, and then extend him as the season progresses so that he's a regular member of the rotation by the time the season is winding down and he's reaching his 160-170 innings.  In other words, do Scenario 3 that Sherman proposes.  If he gets hurt, then this all goes out the window.  But for starters, the Yankees have to let Hughes be a starter.  In the Majors.
Posted by Unknown at 10:00 PM No comments: 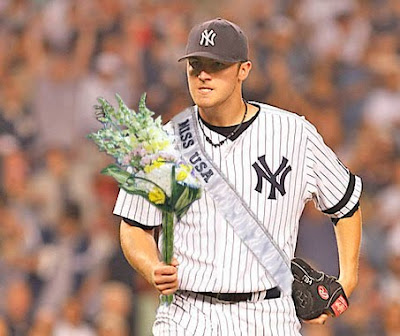 Now that that’s over with, let's see what the kid can do. I feel confident that this is the year Hughes puts it all together, even if the Yanks have to get creative to manage his innings properly (we'll cover that later tonight).  And if he struggles or gets hurt again, we already know the Yanks have plenty of viable options to plug in for him.
Posted by Unknown at 1:56 PM No comments:

Really? Javy Vazquez Did That?? 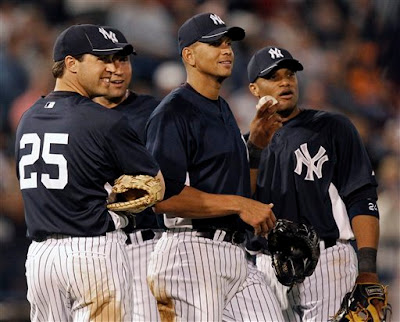 That had to be what these guys were thinking in this picture from yesterday's game.  Here's Vazquez's line: 6IP, 4 H, 1 ER, 0 BB, 6 K on 77 pitches, 55 for strikes.  He kept hitters off balance all night with this off-speed stuff, which is light years better than what he threw in 2004.

Production like this from the "4th" starter makes me feel much better about the fact that A.J. Burnett can't get out of his own way as the 2nd starter.  Maybe this is a different guy than what we saw in the 2nd half of '04 after all.
Posted by Unknown at 12:51 PM No comments: