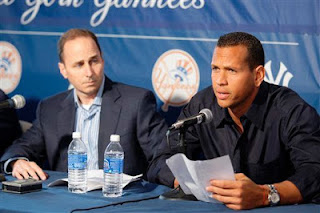 
The worst part about it is that Cash said this stuff to Andrew Marchand, the MSM's king of pot stirring, fake controversy, and cheap pageviews.  That makes it pretty obvious that Cash and probably the entire front office wanted this message delivered to as many eyes and ears as possible.  If I'm tying this to a larger conspiracy theory - and believe me, I am - this seems like a blatant attempt by the front office to smear A-Rod and publicly shame him into retiring early so the team can get out from under his remaining contract.  The media is always chomping at the "let's gang up on A-Rod" bit and the anti-A-Rod spin is already starting to come out in waves from the rest of the Yankee MSM.  Between the injuries, the declining production, the Biogenesis stuff, and now this, I'm sure Cash, Levine, and the Steinbrenners are all sitting in their offices with their fingers crossed that A-Rod will decide he's had enough of getting beaten up and hang 'em up after this season.  If they can go on the media offensive and try to hasten that endgame, even better for them, right?

Cash's statement yesterday would have been out of line in response to anything A-Rod could have said.  The fact that it was in response to something ultimately harmless and positive in nature makes it even more ridiculous and I guarantee that would not have been the response had the player in question not been A-Rod.  Make no mistake, Alex Rodriguez did nothing wrong here.  Nothing.  Cash was completely in the wrong and completely unprofessional in his response and it's just one more layer to add to the confusing and head-scratching year he's had talking to the media.

I don't know what Cash's motivation was for saying what he said yesterday and I don't know if this was him saying this or him being the mouthpiece for somebody else higher up.  Regardless, the whole thing stinks and is brutally reminiscent of the smear jobs the Boston front office puts on any former player or coach they run out of town.  If this really is part of a bigger plan by the Yankee front office to force A-Rod out the door, it's shameful, petty, and flat out cruel.  With what he's been stirring up every time he opens his mouth lately, Cash might want to think about taking a bit of his own advice and shut the fuck up for a while.
Posted by Unknown at 8:46 AM

I think Cash didn't need to include an F bomb but Arod of all people should not be on twitter...

I dont tweet so I'm unsure when Alex sent that out but maybe Cash was frustrated with him taking away from a hell of a win last night.

I don't have a Twitter account either. I know I'd get myself into trouble if I did. But to say that A-Rod shouldn't be on Twitter is ridiculous. He's got just as much right to be on it as anybody and everybody else and there was nothing wrong with what he said.

Idk man, I dont feel at all ridiculous saying Arod should not be on twitter considering the PR disasters hes had in his career. Hes "shot himself in the foot" so to speak enough times to have lost his tweeting privileges in my eyes.

The Yankees are shady with how they handle injuries but I think they should be in-charge of when to release information like that. What good is it to start the clamor for his return to the Bronx prematurely?

Did you watch Jayson Nix play third base last night? Any news about A-Rob getting closer to being back on the field is good news. Don't care where or who it comes from.

I totally agree with that, the Yankees need him badly. I'm not sure how much 3B he will be allowed to play on that bad hip though.

Its good news but it should have come from a team spokesman.