I'm Not Liking This Edwin Jackson Situation One Bit

I didn't put too much weight into Jon Heyman's report last night about Hal Steinbrenner and Scott Boras meeting to discuss Edwin Jackson.  Heyman basically exists to be Boras' mouthpiece and to create markets for his clients, so no big deal.

But now that Marc Carig has the story as well, and explains that Boras requested the meeting and Steinbrenner agreed to see him, I'm really starting to get nervous.  In my FA profile on Jackson a few months back, I stated that he would be my last resort as a rotation target because of his inconsistent performance and the fact that him being 28 made it more likely that he would seek a longer-term deal.  And nothing has changed since then.  I'd still rather have Oswalt and Kuroda than Jackson, and I'd rather see the Yankees stick with the 5 they have penciled in right now than sign Jackson.

Maybe the front office is once again split on whether or not to pursue a potential target.  Maybe the Hanks and Levines of the world crave them some Edwin Jackson and are forcing this behind the scenes.  It is almost the 1-year anniversary of the Rafael Soriano, and tomorrow is Friday The 13th.  I'm just sayin'...
Posted by Unknown at 12:52 PM No comments: 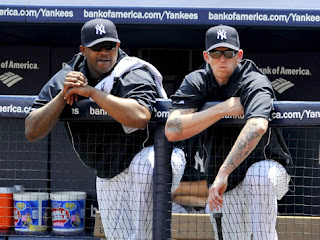 (The ace and the... other guy.  Courtesy of The Daily News)
The rotation to start 2012 will look an awful lot like the one we saw to open 2011, at least as of today.  That might not seem like a reason to be overly confident, but collectively this group can still be effective enough to get the job done.  Just how effective will depend on whether each pitcher Regresses from, Rebounds from, or Remains at his 2011 level of production.

It'd be downright stupid to expect anything less from CC in 2012 than what he's provided since first putting on the pinstripes.  He's still in his prime at 31, he won't turn 32 until July, he's got another fat contract in his back pocket, and he's making another attempt to shed some weight prior to the start of Spring Training.  Now the first go-round with that effort didn't pan out over the course of the 2011 season, but he still pitched incredibly well.  For as long as he's been doing this, we almost have to give CC the benefit of the doubt when it comes to him handling the type of workload he does at the size he is.  He's been the one constant in this rotation since 2009 and he'll continue to be that in 2012.  Pencil him in for another 230+ IP, ERA and FIP numbers in the high 2.00s-low 3.00s, 8.00+ K/9, 6-7 WAR, and a top 5 Cy Young finish.

Call me crazy, but I think there might be something to Super Nova's strong 2011 finish.  His velocity was up, his command was much better, and his slider developed into a very useful pitch, practically bypassing his other secondary offerings to become his out pitch by the end of the year.  Nova also made great strides in the 2nd half of last season in his ability to work through a lineup multiple times, change up his offerings, and really think his way through an outing.  He's always pitched with great poise on the mound for a young pitcher, and now he's starting to learn the finer points of pitching to refine his game.  Considering that he's only been a starter at the Major League level for a little over a year, it's reasonable to expect that he still has room to improve.  He won't become a future ace of the staff, but maintaining his pace from the 2nd half of 2011 should result in a very good year for Nova in 2012.

As stupid as it would be to expect anything less from CC in 2012, it would be equally dumb to expect anything more from A.J.  At this stage in his career, with declining stuff and spotty command, A.J. is really a 4th starter at best making 2nd starter money.  The best thing anybody can say about him is that he provides innings, but as the quality of those innings continues to trend downward along with his fastball velocity, calls are going to start coming for the Hector Noesis and Adam Warrens of the world to get their shot.  If A.J. had a reliable 3rd pitch, perhaps he could combat the losing battle he's fighting with Father Time.  But 35 is a little too late to start working on that, especially when you're a pitcher whose biggest issue has been repeating his mechanics and delivery.  An ERA over 5.00, a FIP somewhere close to that, a lot of wild pitches, and more ill-timed HR allowed is what I'm expecting from A.J. in 2012.  But hey, at least he's consistent.

Freddy's 2011 production was arguably the most pleasant surprise out of the entire pitching staff.  He provided stability and consistency to the rotation multiple times during the season when guys like Hughes and Bartolo hit the DL.  Unfortunately, the numbers he pitched to probably aren't sustainable for another year given his stuff and his recent track record.  He hadn't posted a sub-4.00 ERA since 2005 prior to last season, and has only put up one season with a lower HR/FB rate than the 8.2% he had in 2011.  Considering his GB rate went below 40% last year while his FB rate rose, and he isn't going to be making a huge jump in his K rates any time soon, the signs are all there that 2012 will be a year where we see more balls finding the gaps and the seats off of Freddy.  He shouldn't fall off a cliff completely, but Freddy circa 2010 is far more likely an outcome than a repeat of what he did in 2011.

Phil's 2011 couldn't have been much worse, which makes him an obvious candidate to have a bounce-back year in 2012.  The big question is, exactly how big is that bounce back going to be?  Should we be expecting pre-2010 ASG Phil?  Post-2010 ASG Phil?  Something in between those 2 versions?  Or some version of Phil similar to the one that finished 2011?  Whatever version we get, it has to be better than the guy who posted a 5.79/4.58/4.90 slash with just 5.67 K/9 last season.  Hughes will be further removed from his heavy 2010 workload and will be back in better shape after getting shipped out to Cali, so the life in his fastball that was missing for most of last season should return.  If it does, then Phil will be set up for success as everything he does is off the fastball.  His secondary offerings and how well he commands them will determine just how big of a rebound he has in 2012, but even staying healthy and pitching a full season will be an improvement.

Because it's the same 5 guys who finished the season in the rotation last year, there shouldn't be expectations for drastic improvement.  But Nova repeating the success of his 2011 second half and Hughes coming back to be a reliable 3rd-starter type should help this group at least maintain the success that last year's rotation had.  Anything positive from A.J. is just icing on the cake at this point.
Posted by Unknown at 9:30 AM No comments: