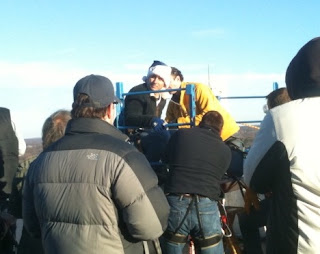 (Photo and all quotes below courtesy of Chad Jennings at LoHud)﻿
Last month I picked apart what Cash said and turned it into what he was really saying when he spoke at the end of the year press conference.  He was up in Stamford doing his rappel thing yesterday, and luckily for us he was a bit of a chatty Cashy.  Let's see what he said and what he really meant this time.

What He Said: “I’ll make a recommendation to ownership and they can bless it or they can tell me no, but right now we’re going to go to Dallas, we’re going to continue to engage."

What He Meant: "Hey, Randy and Hal!  You guys remember when I advised against Rafael Soriano last year and you guys overrode that recommendation?  Yeah, how'd that work out last year?  You should probably listen to me when I make my recommendations and follow my lead at the Winter Meetings.  Morons."

What He Said: “… Right now, if you’re asking me do I expect to do something in the next week? No. But I’ve had enough conversations where I could wind up doing something today. A lot of work has been done. A lot of conversations have been had. If somebody bends or adjusts, then I’m ready to make a recommendation for us to make a move.”

What He Meant: "We know exactly who we want to target and exactly what we're willing to pay or give up to get them.  Right now, asking prices are too high, but I'm not as stupid as these other GMs may think and I expect them to come down.  And when they do, we'll make our offers to get our guys."

What He Said: “There’s not a primary, obvious, stated target that everybody knows about."

What He Meant: "You idiots think we aren't flying under the radar on some guys?  Have you been around the last couple offseasons???  Duh!"

What He Said: "Obviously a big effort on our part was CC Sabathia and retaining him."

What He Meant: "Oh yeah, did I mention we signed the biggest potential free agent starting pitcher this offseason before he even became a free agent?  Funny how everybody seems to have forgotten that move already."

What He Said: "At the same time, we’ve got a lot of talent on this payroll, I mean, on this roster. And our payroll is not limited, it’s just not."

What He Meant: "Any teams out there interested in Wilson or Darvish better be ready to come with the check books open.  Because seriously in on them or not, I can spend more than you and I'm not afraid to fuck around in the rumor mills just to drive up the price you eventually pay.  So if you think I'm bluffing on a better offer than yours, you better be guessing right."

What He Meant: "I know what I'm willing to trade to get the guys I want and what I'm willing to offer to the free agents I want.  If those scenarios don't come up, I know we can win with the team we have right now.  That's why I re-signed Freddy quickly, and that's why I haven't been quick to offer up our young pitching prospects because I know they can do the job if and when they're called on."

What He Said:  “As we continue to look outside for pitching, the next guy we’ve got coming is Noesi.  Behind that is Betances and Banuelos and Warren and Phelps. We are producing some serious pitching that we’re proud of. Robertson and what he did this past year, just the continuation of what’s been a great pro career so far. We’re going to continue to look for ways to reinforce it, but we’re proud of what we’ve got and have high hopes for what’s coming.”

What He Meant: "All you other teams and scouts and ESPN personalities that think we can't develop young pitching can suck my dick."

Just Cash being Cash.  Loves what he has, knows he can win with it, knows everybody else knows that too, and is still out there stirring the pot and preparing for any good situation that presents itself for the Yankees.  The guy seems locked in and ready to do his thing at the Winter Meetings.  It wouldn't surprise me if he swindled some other GMs out of their wives by the time he's done.
Posted by Unknown at 9:57 AM 1 comment: