This weekend was the first meaningful series the Yanks would have played in over a month and I would have to say they responded well.  Their biggest bugaboo over the last 5 seasons has been clutch hitting and getting clutch outs and those 2 departments were the 2 they dominated this weekend.

In this series they were 9-40 as a team with runners in scoring position, a .225 average.  is that great?  No, it's hardly even good, but most of the failures came in a 1-15 performance on Saturday, a game in which if they come through in a couple of those situations, they win the game going away.  Against Jon Lester and company on Friday, the Yanks were 7-21, and even though they only got 2 more hits with RISP for the remainder of the series, those 2 hits were Johnny Damon's 2-run, game-clinching single in the bottom of the 8th on Saturday off of Billy Wagner and Hideki Matsui's 2-run, go-ahead single in the bottom of the 7th today off of Takashi Saito.

The Sox, by comparison, were 3-17 with RISP this weekend, a .176 clip.  They not only did not give themselves nearly as many chances as the Yankees did, but didn't come through on the chances they did have, a testimate to the Yanks' fantastic pitching all weekend from the starters and relievers.

Joba took himself off of life support on Friday night and may have gone from postseason afterthought to guaranteed spot as a 4th starter in the ALDS.

His line wasn't all that great overall: 6IP, 5H, 1BB, 3ER, 5K, but considering what he had been doing lately, and considering he walked 7 in 2 innings last Sunday, this was Cy Young-caliber for Joba.

He had great command of all his pitches, good zip on his fastball, and pounded the strike zone with everything he had.  Most importantly, he worked quickly.  After each pitch he was right back on the rubber, ready to throw the next one.  There was very little shaking off of Posada and very little stalling, even when he got runners on.  He obviously tired in the 5th and 6th innings, but still showed some testicular fortitude in battling out of trouble, something he had seemed incapable of doing lately.

Are there still some questions and potential worries about Joba going out there in a Game 4, must-win situation?  Sure there are, and rightfully so.  But he looked a lot more like the Joba of June and July than the Joba of August-September, and that's the Joba the Yankees need to win.

Much like his start on Monday, Andy got off to a slow start today and things did not look good.  In the first 2 innings he looked like he had nothing and knew it.  But once he got warm Andy was on point again, and if word comes back tomorrow that he had no pain in his shoulder than it should be full-speed ahead for the rest of the season.

It certainly seems like there is some fatigue and Andy has to use the first couple innings to get the kinks worked out, but if he can give the Yankees 6 innings of 3 runs-or-less ball, that's going to be more than enough to win.

The question should now become not "Can Andy pitch?" but "What game does Andy pitch?  Game 2 or Game 3?"  As much as Joe Morgan and Steve Phillips thought he should go 2, I would still give that start to A.J. and keep the lefty, righty, lefty change to force the Tigers or Twins to alter their lineups each game and not let their batters got locked in.

This question, more than any other, was a no-doubt answer in favor of the Yankees.  For the weekend, the pitchers in the Boston pen who would be used in the postseason put up this line:

Mind you, this was just the guys who would make the postseason roster.  If you factor in Yankee whipping boys Hunter Jones and Michael Bowden, the numbers are even worse.  The Yankees bullpen stats by their key guys, by comparison, were:

Those numbers are factoring out J-Alba's stats, but even with those included the Yanks were light years better than Boston in the pen this weekend.  Christ, they got 1.2 perfect innings from Brian Bruney today, which could have breathed a little life into his postseason status.

Combining these stats with point 1, though, is where the story is really told.  Sure both of the runs off of Billy Wagner yesterday were unearned, but he was in the game to prevent ANY runs from scoring.  The job of the big-time bullpen guys is to be stoppers, and pick up your starters and defense for their mistakes and Billy Wagner flat-out didn't get the job done.  Takashi Saito was exactly the same today; he came into the game with a .189 BAA by left-handed hitters and he gave up the eventual game-winning hit to Matsui, failing to pick up his teammate, Paul Byrd, who gave the Sox way more than they were hoping for today, in the process.

Save for Albaladejo, when the Yankees' bullpen pitchers were on the mound this weekend, there was never any doubt they were going to get the job done.  They pitched with confidence, got ahead in the count, and made clutch pitches when they had to.  Heading into the postseason, the Yanks' pen has to be considered a weapon at this point.

I wrote the other night about how much I enjoyed Chip Caray and Buck Martinez's calling of Friday night's game, and although I can't say the same for the ESPN trio today, they ended up being not as bad as I was anticipating.

Sure Steve Phillips is still a blatant Red Sox apologist, and Jon Miller rattled off the Red Sox starting lineup like he was reading off a list of first-ballot Hall of Famers, but all in all, they were relatively even and unbiased with how the called the game.  It was clear as day to anyone watching that they weren't happy to be calling the game even and giving the Yankees their fair share of praise, but at least they did it, which is a sign that maybe the over-the-top Red Sox ball sucking by ESPN is coming to an end.  People are starting to get on board and acknowledge that the Evil Empire is back in charge and they are powerless to stop it.

Now if only somebody could pass that memo on to Joe Buck and Tim McCarver since we all have to suffer through them for the majority of the playoffs, and not Miller, Morgan, and Phillips.
Posted by Unknown at 5:43 PM No comments: 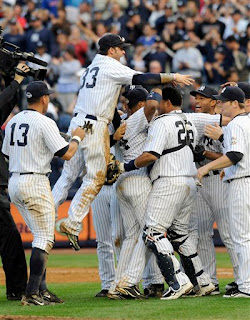 Suck it, Boston.  See you in the ALCS, if you even make it.

Posted by Unknown at 4:52 PM No comments: