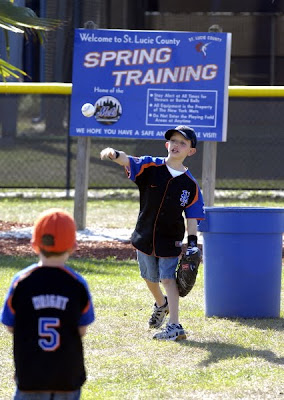 (David Wright and Daniel Murphy loosening up at Spring Training)
Broadcaster Gary Cohen may be able to proclaim, "It's outta here!" a little more often in 2010. And David Wright may not be as inclined to frustratingly fling his Great Gazoo helmet, or whatever protective wear he uses, during the upcoming season.

The height of Citi Field's center-field wall will be sliced in half, making the ballpark more homer-friendly.

Last season, the wall measured 16 feet in front of the sparsely used Home Run Apple. Now, with the second level of padding being removed, it will measure eight feet in the middle of the outfield. Still,...the stadium's spacious dimensions won't be altered.

The Mets hit 95 homers last season, by far the fewest in the majors. San Fran ranked 29th with 122.

They [the Mets] ranked last in the majors in road homers last season with 46. Pittsburgh had the second-fewest with 50. The Yankees and Phillies, who play in hitter-friendly ballparks, also ranked Nos. 1 and 2 in road homers with 116 and 108, respectively.


It just never ends with the Mets. While the Yankees are out there working to get the most out of their budget and build what they think is the best team possible, the Mets are busy trying to adjust their park to accommodate the shitty team they're left with after not spending enough time or money on trying to build the best team possible. Thank Jesus Montero that we had the Daily News to absolutely thrash the Mets' logic on this decision, even if they didn't mean to do it.

THEN you read about how Citi Field, while having low HR averages last year, still had a higher HR-per game average than 4 other stadiums, including LA, Atlanta, and St. Louis. Guess which 3 teams aren't anywhere on the list of lowest HR totals in 2009??? The Dodgers, the Braves, and the Cardinals!

THEN, as if the point hasn't been driven home enough, the Daily News throws the knockout blow with the line about visiting teams hitting more homers at Citi last year than they did at Shea in 2008. 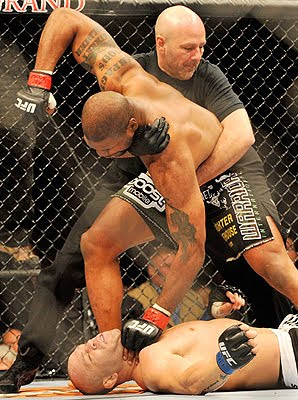 It's all so clear to everybody except the Mets brass that the issue is not that the walls are too high, it's that the Mets team isn't good enough to hit the ball far enough to go over the wall. The numbers don't lie; Citi Field isn't a Death Valley for home runs, the Mets just don't have the personnel to park balls over the fence. The teams that play in the more homer-unfriendly parks aren't changing anything with their fields because they have Albert Pujols, Ryan Ludwick, Matt Holliday, Brian McCann, Chipper Jones, Troy Glaus, Andre Ethier, Matt Kemp, and Casey Blake: players with the power to knock the shit out of a ball instead of lazily flying it to the warning track.

All lowering this wall is going to do is help a few of the balls that Daniel Murphy and Omir Santos and David Wright hit with their warning track power hop over the wall for ground rule doubles instead of bouncing off the wall back into the field of play where they could potentially become triples. What this story shows, plain as day, is that if the Mets want to improve their homer numbers, they need to do what the story said they already weren't planning on doing; Change the fucking field dimensions!! Or if they don't want do that, then sign some better fucking players!!

While we've already established that the Yankees are going to wreck shit again this year, at least if they don't I will have the comedy of errors that is the Mets to keep me entertained. A Triple-A-quality team playing in a Double-A-quality ballpark being run by a group of way wayyyyyyyyyy below Single-A-quality morons I wouldn't trust to line the fields at the Little League World Series.
Posted by Unknown at 11:35 AM No comments: