Bee Attack On The Horizon 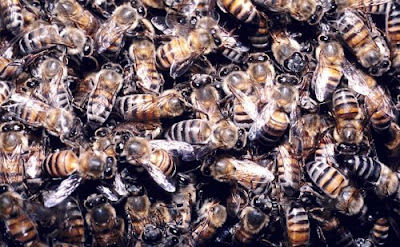 Andrew Brackman  was already on the 40-man, and after this weekend so is Dellin Betances.  Ladies and gentlemen, the hive is building.  It's only a matter of time before all these hosses are out there on the mound stinging the fuck out of every batter who dares step inside the chalk box.  And the scary part is, Man Ban isn't even on the roster yet.  He's still inside the pupa or chrysalis or whatever the fuck bee larva live in before their born.
The Yankees weren't dumb enough to trade these guys for Lee last year, so I'm assuming they aren't going to be dumb enough to trade any of them for The Justin Upton or anybody like that.  They see the future.  And the future is bees, or more accurately, B's.  The time is coming my friends, some time next year, probably later in the summer or early in the fall.  You're going to see an infestation of Killer B's on the mound at Yankee Stadium like you've never seen before.
Odds that each of these guys pitches in a Yankee uniform this year:
- Brackman: 2-to-1
- Betances: 8-to-1
- Banuelos: 15-to-1
Bring calamine lotion or an emergency kit if you're allergic, people.
P.S.- Hector Noesi is on the 40-man too.  Check his Minor League stats up to this point and tell me you aren't getting a little lump in your pants somewhere near the groin region.
P.P.S- Bonus point for me for using the word "chrysalis" in a Yankee blog.  I just high fived myself twice for that one.
Posted by Unknown at 3:20 PM No comments:

A Quick Little Pat On The Back

In case you missed it, the Yankees made their first offer to Jeter over the weekend, for 3 years and $45 million.  And if memory serves me correct, the deal that I said I would offer him would have been for 2 years and $30 mil with a club option for a 3rd year, which comes out to, you guessed it, 3 years and $45 million.  Never mind the fact that the Yanks didn't take my advice and made the 3rd year guaranteed, the important thing is that they recognized the intelligence that I showed in suggesting that shorter deal and took my advice.

At least that's what I'd like to think.  Seriously, when can I turn my genius on this wee little blog into a front office job?  This wasn't the first time I've been right on shit like this and it certainly won't be the last.  You aren't just getting hate lists and F-words here, people.  This is like a window right into the inner workings of Cash's mind right here.
Posted by Unknown at 8:51 AM No comments: