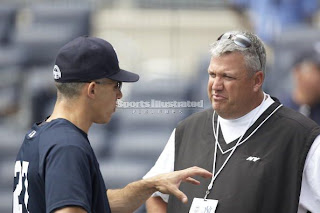 (Photo used courtesy of Getty Images)
I know it's a slow time of year in Yankeeland, what with Andy still not officially making up his mind and the team following Cash's preaches for patience and not jumping to spend the extra money they have (Rafael Soriano, ZOMG!!!!!1!!111!!).  But this sadsack effort by Marchand to come up with something to write about on the ESPN:NY Yankee blog is laughable in its sweeping generalizations and complete disregard for the drastic differences between football and baseball.  Examine.

"There are more similarities between Rex Ryan and Joe Girardi than differences. Both sincerely care about their players.. "

Pretty weak stretch for a comparison, Andy.  How many successful coaches can you name that DIDN'T care about their players?

"... Both seem very true to their families. Both are consumed by the end result."

And there ends the list of similarities.  Now for some differences.  One is fat, the other is slender.  One is loud and boisterous, the other is quiet and calm.  One has braces, the other doesn't.  One is a former professional player, the other isn't.  One has been a part of multiple championship-winning teams, the other hasn't.  One likes to videotape his wife in foot fetish videos, the other would rather study his massive match up binder.  So there goes Marchand's theory.

"It's how they get to the end result is where a dash of Rex could help Girardi. Ryan looks as if he is having the time of his life as the pressure mounts, while Girardi appears as if he is aging like a President.

At the end of last year, Girardi basically admitted it, saying during the pennant race that it was work, not fun. It shows."

Ummm, it WAS work.  Managing the team is Girardi's job, a job he takes very seriously.  And the Yankees were in the running for a division title right down to the last games of the season.  Ryan and the Jets haven't had to worry about a division title or even a playoff berth for weeks.  It was all settled by the Patriots' dominance and the rest of the AFC's suckiness.

"It is not a terrible thing."

So then why the fuck are you bringing it up in comparison to another guy who coaches a completely different sport?  Not only is it not terrible, it's not even bad.

"The reason he [Girardi] has achieved so much in his post-playing career is because of his intensity to detail. He studies numbers and charts probably as much or more than any manager in the game. He is always looking to improve how he does his job and, in turn, the Yankees. To his credit, he is very open-minded to change."

So let's see.  A guy who is generally regarded as one of the hardest-working managers in the game, a trait that has gotten him the job he currently holds as the manager of the most famous team in sports history, and who is also open to change and has shown an ability to change and loosen up in the past, and has used all of this to bring his team to one world championship and one ALCS appearance in consecutive seasons should try to be like somebody else?  Am I the only one that sees how stupid this is???

"He can learn from Rex. He doesn't need to say that it is "personal" with the Red Sox. (Though, Joe, that would be fun, if you did.) But if he could find a way to ride the wave of New York and the enormity of the Yankees the way Rex has, he would be a better, more relaxed manager."

Wow!  Just... wow.  First of all, the "wave of New York" is far bigger for the Yankees than it is for the Jets.  That's like comparing the biggest waves at Maverick to a little kid throwing a skim board across the beach during low tide.  When you look at what he has already done and how he's handled the "wave" since becoming manager, there is no way you can say Joe has done a bad job.

I'll gloss over the fact that Marchand doesn't even use a question mark to finish a sentence in which he is clearly asking a question and just say that no, Joe Girardi acting like Rex Ryan for the entirety of a 162-game Major League Baseball season would not translate to more success for the Yankees.  That act would grow tired in the media over that time period, tired in the clubhouse amongst a team of consummate veteran professionals who take what they do very seriously, and tired for the fanbase of the team that expects just as much success and professionalism as the team itself does.

What Marchand seems to not understand is that football and baseball are 2 completely different sports that require 2 completely different types of head coaches.  Football is a sport based on intensity, emotion, and constant violent physical contact.  That's not to say that there isn't thought and strategy involved and that patience and intelligence are not important to possess, but at it's core it is about the previous things I described.  A football coach needs to be able to draw upon these things to inspire his team and get them to play to their potential and build up that energy and intensity over a period of a week when it all culminates each Sunday.  This is why Ryan is so successful, because he is a loud, energetic guy who uses that energy to get the most of his team each and every week.  He is not the laid back, relaxed, Spiccoli-type that Marchand portrays him to be in this post, he is an intense motherfucker.

Baseball, on the other, is, at its core, a game of patience, strategy, and focus, and all 3 of those things have to be consistently done during the course of multiple games a week for multiple weeks a year.  Players cannot afford to be overly emotional, for better or worse, because there is another game to be played the next day and they have to re-focus their attention to that.  As such, baseball managers needs to be able to keep their players focused, calm, and ready for the next set of challenges.  Constantly blasting players with "rah-rah" speeches and motivational videos and shit like that distracts them for focusing on the small details that define the line between success and failure in baseball.  Joe Girardi excels at all of these things, sometimes to a fault (see: consulting the match up binder too much), but his makeup and approach to managing suits the sport he manages, just like Ryan's does.

Joe Girardi would not be a successful football coach with his personality, and likewise Rex Ryan as a baseball manager.  Each is perfectly suited to coach the sport he does, and the success each has had coaching his respective team is a testament to that fact.  To suggest that one should be more like the other in order to be more successful or for his team to be more successful is irresponsible, idiotic, and downright lazy as a writer.  I mean, Jesus Christ, Andrew, if the day is that slow that you have to write crap like this, just bite the bullet and throw up some links like I do.
Posted by Unknown at 3:44 PM No comments: 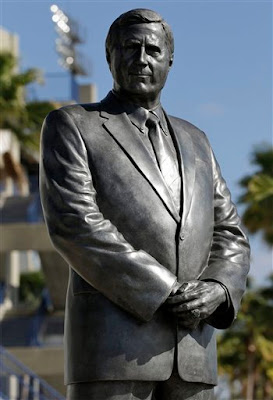 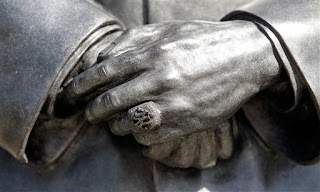 (Photos courtesy of The AP)
That is the statue that was unveiled outside of Steinbrenner Field in Tampa last week and not only is it the coolest-looking honorary statue in the history of sports just for the way it looks, it has heaps of added badassery thanks to the inclusion of a championship ring on The Boss' left hand.

What a perfect way to honor Steinbrenner and capture what he was all about.  The guy didn't give a fuck what anybody thought about him or his practices, he just wanted to win.  And to include a reminder of that goal in the statue is pretty cool indeed.  Not to mention that the statue itself actually looks like him, unlike the Michael Jordan one outside the United Center or the Bobby Orr one in Boston.

Even in death, The Boss still kicks more ass than just about anybody.
Posted by Unknown at 12:11 PM No comments: