So here's the deal, people.  I'm flying home for the weekend for some activities so the constantly awesome material I've been churning out lately is going to slow down a bit.

I can promise you that I will post something any time I have an opportunity to do so.  I can also promise you that with a wedding on Saturday (complete with 6-hour open bar reception and an after party in the hotel bar after the reception), NFL football and bar hopping with my buddy on Sunday, and what will undoubtedly be a kickass Alice In Chains/Deftones/Mastodon concert on Monday, those opportunities will be few and far between.

So there you go.  You might get some stuff or you might have to sit tight and be patient until Tuesday.  This is the downside of only having one writer on the team.

Whatever.  It's an open bar reception!!!  Cheers, bitches! 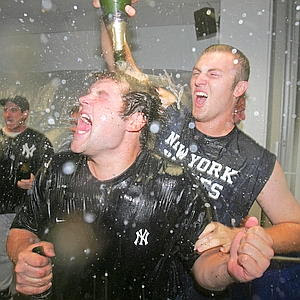 Why Are We Even Mentioning This Right Now?

Last time I checked, it was still the 2010 regular season, but I guess I must have missed something because there are already stories being written about the Yankees' 2011 schedule.  Don't believe me?  It's true.  Check here and here.

Guys, what the fuck???  We still got 16 games left to win the division and then the whole playoffs to cover.  Who gives a crap about 2011?

When the Yanks finish their parade down the Canyon some time in November, then we can start discussing the 2011 schedule.  For now let's focus on the tasks still at hand, OK?
Posted by Unknown at 10:35 AM No comments:

The Most Talked About HBP Ever 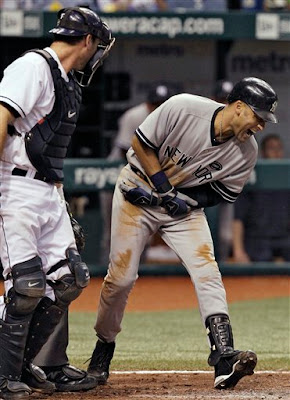 (Photo courtesy of The AP)
Are people really that fired up about Derek Jeter's fake HBP the other night?  Is it really that big a deal?

All day yesterday I'm reading stories on all the blogs and all the major sports sites talking about the play, how it affects Jeter's legacy, what it means about his struggles this season, what would people be saying if A-Rod had done that, etc.  Then I go home for lunch and SportsCenter's entire coverage of the game from that night was based around Jeter's play and everyone's reaction to it.  Then I get home after work and that play is the lead topic on PTI and we're bringing in Tim Kurkjian and everybody else to talk about what Jeter's fake means in the context of expanding instant replay in baseball.

All I have to say is, are you fucking kidding me???  Is this real life right now???  What planet am I living on where this play becomes so newsworthy that it overshadowed the eventual outcome of the game and the subsequent changing of hands in the division lead again?  Was it a sneaky play?  Absolutely.  Jeter knew he wasn't hit, but the ump didn't and Jeter took what the guy gave him, putting on a very convincing act in the process with superb supporting performances by Joe and Gene Monahan.  He's certainly not the first guy to fake getting hit by a close pitch up and in and he certainly won't be the last.  What Jeter did was no different than catchers trying to frame pitches to make them look like strikes or runners on 2nd trying to steal signs and I don't hear an uproar from the media about that.

The fact of the matter is, Jeter was playing to win, which is what you're supposed to do as a professional athlete.  The umpire made the mistake and called him hit and Jeter ran with it.  It's not his job to be the moral compass of baseball, it's his job to do whatever it takes to help his team win.  It's not different than if somebody at a restaurant gives you too much change on your bill.  Would you call them back and say "hey, there's too much money here?"  If you would, then you're an idiot.  You take what's given to you.  That's what Jeter did and that's what every other player in that situation would have done, so just leave it at that and move on to more important things.
Posted by Unknown at 9:24 AM No comments: