Have people noticed the ad ESPN has been using to plug Sunday night's Yanks-Sawx game?  The one with A-Rod where the voiceover makes direct reference to his steroid suspension and then calls him a lightning rod?  I've long given up on the idea of ESPN pulling its head out of its ass and getting back to being a reputable sports network, but it almost astounds me how they continue to find new ways to drop the bar even lower.  A-Rod is a "lightning rod" because you guys cover him like he's the worst person who ever existed.  You over-dramatize everything he does when you cover the guy, you trash him nonstop, then you use him to plug yourself and your product while acknowledging that you over-dramatize him and trash him.  Incredible.  Now onto the links!

- On Monday, Domenic Lanza of IIATMS/TYA put together an all-encompassing breakdown of the all-homegrown MLB rosters.  If you missed this earlier in the week when it was blowing up the baseball blogopshere, here's your chance to redeem yourself.

- On Tuesday, Andrew Mearns of Pinstriped Bible looked back at Alex Rodriguez's strange walk-off celebration batting helmet fetish.  I had never noticed this before and it's absolutely hilarious.

- Bryan Van Dusen of The Greedy Pinstripes crunched some numbers from this season to show how CC Sabathia could start to become a huge burden on the payroll if he doesn't start pitching better next season.

- Martin Riggs of NoMaas made a case for Hiroki Kuroda's Cy Young candidacy, and compared him to leading contender Felix Hernandez.

- Delia E. of Yankees Fans Unite mused on Brett Gardner's leadership qualities and how he's stepped up to assume a bigger leadership role with Derek Jeter out for so much of the season.

- On Wednesday, Chad Jennings of LoHud compared the differing paths that Chris Stewart and Austin Romine are on behind the plate.

- SG of RLYW played with projections and win-loss pace to see how much the Yankees will benefit from the upgrades to the lineup.  They're much better, no doubt, but that's still a tall mountain to climb to make the postseason.

- On Thursday, el duque of It Is High... looked ahead to this make-or-break weekend series against the Sawx.  I guess a Yankee sweep would at least make things interesting.

- Mike Axisa of RAB discussed Michael Pineda's service time situation and how it could affect the Yankees' plans for him moving forward after another lost season.

- On Friday, Michael Eder of IIATMS/TYA showed how the move to Yankee Stadium could do good things for newly-acquired Mark Reynolds' production.

This week's jam is "The Symbol" by Action Bronson.  Even if rap isn't your cup of tea, you should be on the Action Bronson bandwagon.  Big fat white guy with a vicious beard who can rap, is shoot hilarious, readily admits that he's high all the time, and also happens to be a gourmet chef.  Sounds like a pretty fun dude to hang out with if you ask me.

Enjoy your weekends, everybody.
Posted by Unknown at 2:10 PM No comments:

Mark Reynolds Finally Give Overbay The Platoon Partner He Needs 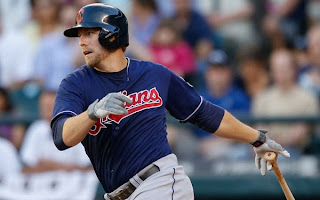 It took much longer than it should have, and it's a little puzzling that the Yankees decided to let weeks go by after the trade deadline before finally addressing it.  Still, the addition of Mark Reynolds to the bench gives them the right-handed platoon bat they very much needed to pair with Lyle Overbay.  As first reported by Jon Heyman, the Yanks and Reynolds agreed to a deal last night, and he should be with the team and available for the start of tonight's series against the Sawx.  After suffering through the first few months of the season with next to no right-handed power, the Yanks now have another big righty bat to use. 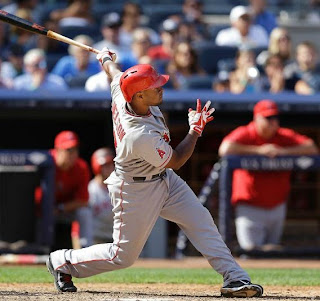 Can you believe we've reached the quarter pole of the 2013 season?  It doesn't seem that long ago that we were worrying about CC's velocity, Derek's ankle, and A-Rod's hip.  Now we've moved on to CC's command/weight, A-Rod's suspension, and Derek's... well, ankle still.  The Yankees have fallen out of the lead spot in the AL playoff race, but they're toying with the idea of legitimately pulling back into contention with this little run of 5 wins in 6 games.  The middle of their order has beefed up, and they could have made a statement to the rest of the AL with a win yesterday afternoon and a series sweep of the Angels.  Instead, they got beat by one of their former sub-replacement level middle infielders.  Can't make this stuff up.

- Phil Hughes was up to his old tricks early yesterday, giving up a 2-out hit on a poorly-located pitch to allow Anaheim to get on the board first after striking out 2 batters in the top of the 1st.  Worse, he gave up the hit to Josh Hamilton's corpse.

- The Yanks evened things up in the bottom of the 3rd on an Alfonso Soriano RBI single.  The inning could have been bigger than just 1 run had Vernon Wells not rapped into an inning-ending double play with the bases loaded.

- Hughes didn't keep the game tied for very long.  In fact it only took him 4 batters into the next half-inning to turn the tie into a 3-1 deficit.  I don't know much, but I know it's not good to give up a home run to Chris Nelson after a 10-pitch at-bat where you couldn't put him away with 2 strikes.  His solo shot was his first homer of the year.

- There was no shortage of hits against Angels starter C.J. Wilson.  The Yankees got at least 1 runner on base in all of the first 6 innings.  They also stranded almost all of them and had just the 1 run to show for their 10-hit effort.

- With the game still 3-1 in the top of the 8th, Joe went to Boone Logan in a LOOGY situation and even got the bonus of another out against righty Erick Aybar.  With 2 outs and a runner on second, Joe called for the intentional walk of Mark Trumbo to pitch to Hank Conger.  Logan walked him too, unintentionally, to load the bases and up came Nelson again.  Logan left an 0-1 slider up to him and Nelson snuck it over the fence for the game-clinching grand slam.  I get pitching around Trumbo to get to 2 weak hitters.  I don't get leaving Logan in to face those righties in the first place.

- If you want to, you can talk about the Yankees' token 3-run rally in the bottom of the 9th to make the game respectable.  I'm not.  I'll just say at least they're still hitting.