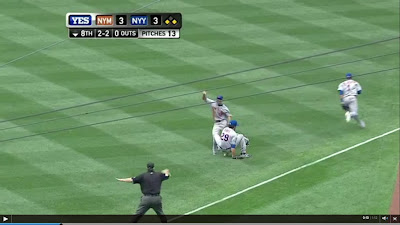 Well that was fun today, huh?

On Friday, I came right out and said that the Mets weren't actually a good baseball team, and I don't think any game in this series better exemplified that statement than today's.  The Mets didn't fully capitalize on the small advantage they gained in the 2nd inning, barely did anything on offense from then on, had their best player make a crucial error that opened the door for the Yankees, and got bad pitching from their bullpen to complete the loss.

The Yankees, on the other hand, played a very sloppy game on both sides of the ball, didn't hit with runners on or in scoring position AGAIN, and somehow managed to scrap together enough late lucky hits to capitalize on the opportunity that David Wright gave them in the 7th.  Overall, it wasn't a good game for the Yankees and they still got the W because that's what good teams do; they find a way to win even when they aren't at their best.

The Yankees are a good baseball team; the Mets are not.  And this series proved it.
Posted by Unknown at 5:51 PM No comments: 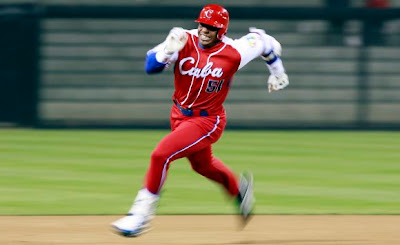 The Jorge Soler Sweepstakes was reignited yesterday when Buster Olney tweeted that the list of teams who were the "most aggressive" in their pursuits of the young Cuban was down to 4- the Dodgers, Cubs, Braves, and Yankees.  That fire was stoked a bit more today when The Post reported that Soler was expected to finalize a deal with one of those teams before tomorrow.  According to George King, Soler and his agent are looking for a 4-year deal, and with what's already known about the 20-year-old Soler that's a deal the Yankees should make sure they offer and make sure they offer a good one.

The makeup on Soler paints him as a potential 5-tool player with plus power, speed, and arm strength.  If he were in the recent MLB Draft, he likely would have been a top 5-10 pick.  He's not a finished product yet, and almost certainly wouldn't make an immediate Mike Trout or Bryce Harper-like jump to show, but Soler would be an easy top 5 prospect in any organization.  His 4-year contract won't be a cheap one, but he'll almost certainly come cheaper than Yoenis Cespedes, and at 6 years younger than Cespedes he's positioned to have a longer career. 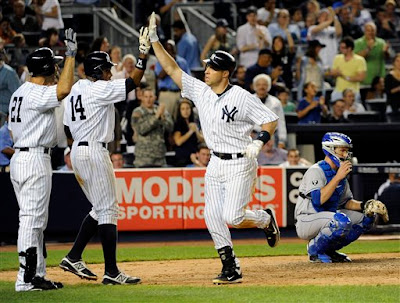 (Check the WPA on that play.  Courtesy of The AP)﻿

Phil Hughes threw the best game of his Major League career in his previous outing.  Before that, he threw one of his worst.  There was really no way to predict what version of Hughes would show up to pitch against the Mets last night, even if his overall performance had been solid for the last month or so.  If his fastball command was there, he should have success against the weak Met lineup, and it turned out that it was.  The only question was whether or not the offense would give him enough run support.

- The bottom of the 1st perfectly encapsulated the Yankee offense this season.  Jeter led off with a single, A-Rod drove him in, they loaded the bases with only 1 out, and Raul Ibanez grounded into an inning-ending double play to limit the damage to 1-0.  Fucking failboat.

- Hughes was solid through 5 innings, allowing a solitary run on a solo HR by some guy named Omar Quintanilla, and striking out 6.  He gave up some hits here and there, but did a good job of limiting damage.  He struck out the side looking in the 5th, all on well-located fastballs.

- The problem was that the offense did nothing to help him after the 1 run in the 1st.  Dillon Gee pitched pretty well, but I can't give him too much credit, because he's Dillon Gee.  He walked the leadoff batter in the 3rd and 4th innings, but the Yankees couldn't do anything.

- After striking out David Wright on a brilliant curveball-curveball-4-seamer sequence in the 4th, Hughes tried to get cute and work a changeup into the mix in the 6th and Wright hit it for a HR.  You can't get too upset at David Wright hitting HRs against you, but with the lack of run support it put the Yankees in a 2-1 hole.

- Apparently all the offense needed was a deficit to wake them up.  In the bottom of the 6th they jumped back ahead on a Mark Teixeira 2-run HR.  It came with 2 outs and 2 strikes, and on the 3rd curveball of the AB that Teix absolutely knew was coming.

- Curtis Granderson, mired in a mini-slump, provided some insurance in the 8th with his 18th HR of the season off Bobby Parnell.  The lesson, as always, don't miss with a fastball over the plate against Curtis.

- Hughes pitched into the 7th and got 2.2 innings of solid bullpen work to close out the win.  Strange to see the 'pen not rack up one K.