I'll be attending Brewers Opening Day on Monday and I'd be lying if I said I wasn't equally as excited for that as I am for the Yankees the next day.  I've never been to a season opener for any team in any sport before, unless you count UConn football and I don't.  As a diehard sports fan, it's an experience I'm very much looking forward to taking in and for once I'll be the one trying to herd everybody into the stadium to see the Star Spangled Banner and first pitch.  Lots open up at 10 AM officially and somewhere between 8:30 and 9 unofficially, so it's going to be quite the day of drinking and merriment.  Needless to say, Monday won't be a very active day for the blog, but I'll make sure to get a few things scheduled before cracking the first beer.  Now onto the links!

- On Monday, Chad Jennings of LoHud dished a whole crapload of Minor League updates, on everything from injuries to team assignments.

- Vizzini of NoMaas discussed the efficiency with which the Yankees spend their money, and correctly pointed out that their organizational expectations provide a different context for spending efficiency/inefficiency than most other teams.

- Mike Axisa of RAB put a bow on his 2014 season preview series with a personal preview of Derek Jeter's final season.

- On Tuesday, Michael Eder of IIATMS/TYA identified a pair of potential trade partners for Ichiro if the Yanks are really trying to move him.

- On Wednesday, Jason Evans of Yanks Go Yard kicked around the idea of bringing a 2nd lefty in the bullpen and weighed the remaining options.

- On Thursday, Chris Mitchell of Pinstripe Pundits examined how much of a hit the Yankees will take defensively without Brendan Ryan available at shortstop to open the season.

- Scott Davis of Pinstripe Alley mused on Alfonso Soriano and the added versatility he'll bring to the lineup this year.

- SG of RLYW compiled his 2014 projections into an all-encompassing look at what to expect from the team this season.  He's got the Yanks at about a mid-80s win team, so take that however you want.

- On Friday, Alphonso of It Is High... creatively vented his frustration with the Yankees for sending Zoilo down to the Minors again.

Going old school with some Queen for this week's Friday Jam.  Gonna be a helluva time on Monday.  Such a good time. 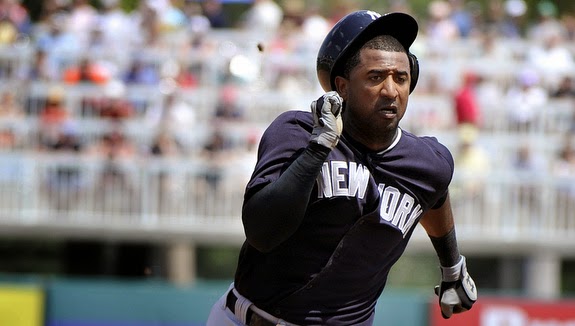 Forbes released its list of MLB franchise values yesterday, and in a major upset the Yankees came in at number 1 with a cool $2.5 billion value.  This is up from last year's $2.3 billion value and marks the 17th straight year that the Yanks have been the most valuable MLB team.  The Dodgers came in second at $2 bil even, and according to the full article the Yankees rank ahead of the Dallas Cowboys by $200 mil as the most valuable franchise in all of pro sports.

Considering that ticket sales, attendance, and TV ratings were all down last season as a result of the watered down on-field product, it's impressive that the Yankees were able to increase their value.  Just goes to show how big an international brand they are and how much they stand to make this year with the addition of Tanaka and a potential return to the postseason.  They may not have enough money to spend on Stephen Drew (they do), but the Yankees are still clearly doing just fine when it comes to the dollars and cents side of baseball.  Now somebody hit the music!

The Yankees were victorious in the 2014 Spring Training road finale yesterday, beating the Pirates 4-2 behind 4 shutout innings from CC Sabathia and 3-hit days from Ichiro, Eduardo, and Zoilo.

- Sabathia was just going through the motions and threw 44 pitches in his 4 3-hit innings, but it sounds like he looked sharp.  Next time we see him will be in the top of the bottom of the 1st on opening day.

- All 3 5th starter competition "losers" (David Phelps, Adam Warren, Vidal Nuno) worked out of the bullpen after CC.  They combined for 2.2 IP, 5 H, and 2 ER (Phelps) and are slated to pitch again on Saturday.

- No game yesterday for Jacoby Ellsbury, but he did go through a full workout.  He'll play in another MiL game today, maybe another on Saturday, and is still on track to be ready for Opening Day.

- Big day of morning roster cuts, with Preston Claiborne, David Herndon, Fred Lewis, Zoilo Almonte, Russ Canzler, and Scott Sizmore all getting reassigned to MiL camp.  Only a few real roster competitors left.
Posted by Unknown at 7:10 AM No comments: