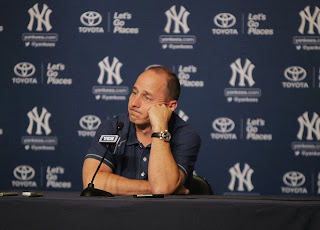 While we're on the topic of interesting things said by Joe yesterday, how about his comment that David Robertson, Shawn Kelley, and Preston Claiborne will all be part of the bullpen next season?  It may not sound like much, but when you consider the available spots in the 'pen and the number of available bodies, it may shed a little light on what the Yankees plan to do with David Phelps and Adam Warren.

Using my Project 189 team as a hypothetical starting point, I had Claiborne as the odd man out to start the year based on the assumption that the Yankees were going to carry both Phelps and Warren.  If Claiborne is in as far as Joe's concerned, that locks up 3 of the 7 available spots.  Another one is going to be reserved for a LOOGY, another will probably be saved for Dellin Betances since it's put up or shut up time for him, and I still expect the Yankees to sign Veteran Reliever X to take on some of the late-inning work.  That's 6 guys with only 1 open spot remaining for a long man.

Joe touched on a lot of topics when he met with the media yesterday.  My favorite part might have been his explanation of the center field situation and what he planned to do to address it with the 2 candidates to start there:

Good on Joe for staying PC and fair to Gardner, the incumbent starter, but I think we all know how those 2 conversations are going to play out.

- With Ellsbury: "Ellsy, you're going to play center field."

- With Gardner: "Gardy, Ellsy is making $153 million.  You're making about 4 and change.  Who do you think is playing center field?"

And there you have it.  Starting center fielder issue resolved.