A little over a month ago, Brian Cashman stated that Eduardo Nunez would be shifted back to the utility infielder role that was taken away from him in 2012 because of his defensive struggles.  That announcement inspired my response post in which I openly questioned the Yankees' logic and decision making when it came to handling Nunez.  While acknowledging that Nunez has all the tools to be an effective utility infielder and was the best in-house candidate for the job, I felt and still feel that the Yankees' failure to stick with one defined role for Nunez was hindering his development and possibly contributing to his continued problems in the field.

This past weekend, the saga continued when Joe announced that Nunez would work exclusively as a shortstop in camp this year and there are no plans to work him in at any other position "for right now."  The reasons for doing this are obvious and sound, as Derek Jeter is expected to have a slow spring to work himself back from his ankle surgery and will definitely need regular days off early in the season regardless of whether he is able to play on Opening Day or not.  Nunez is the most logical choice as a backup for Jeter, and making sure he's prepared to fill that role makes sense.

With regards to the utility infielder position and Nunez's involvement in that role, however, Joe's statement does cause a bit of trepidation, if for no other reason than it's not in agreement with what Cash said earlier.  Third base is going to be just as much an area of concern with respect to health and rest as shortstop is, and Nunez was expected to be the backup for that position as well under the "utility infielder" title.  This disagreement in role definition from the two guys most in control of setting the definitions could be setting Nunez up for failure again, and could result in an adjustment of the projected bench roles and players filling those roles if there are still questions about Nunez's ability to handle the utility infielder job.
Posted by Unknown at 10:42 AM No comments: 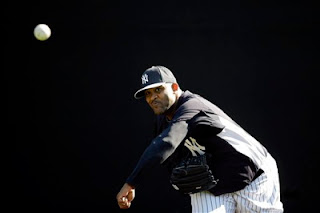