After letting us twist in the wind for the majority of the day, Brian Cashman announced a little while ago that the MRI on Derek Jeter's right quad revealed a Grade I strain and that Jeter will remain out of the lineup through the ASB before being re-evaluated.  There are no plans to put Jeter on the DL right now and the team is hopeful that a few extra days' rest will be enough to heal the strain and get Jeter back in the lineup.

All things considered, it's not the worst news in the world.  In that it came in his first game and is a pretty sure sign that he's not 100% physically, it's still bad news.  This is likely what we're going to see for the rest of the year with Jeter after the team scrapped his original rehab plan and rushed him back.  Strains and tweaks and twinges and a lot of extra days off.  I wouldn't be surprised if he did nothing by DH for the rest of the season when he is healthy enough to play.
Posted by Unknown at 3:07 PM No comments:

Going to a wedding tomorrow, my one and only wedding of this calendar year.  Already had it confirmed that the ceremony will include a full Catholic mass, which will be agony, and it has not been confirmed if the reception is open bar.  Full disclosure, I'm not planning on ever getting married or having kids, at least not any time in the foreseeable future.  But it just seems to me that if you're going through that whole wedding rigmarole and you don't have an open bar at the reception, you're an asshole.  Yes, that's a huge unfair blanket statement and it does not factor in a litany of legitimate reasons why some couples can't/wouldn't have an open bar.  I still stand by it.  If your wedding reception isn't open bar, your wedding sucks.  It's that simple.  I don't care if Mastodon is the wedding band.  It still sucks.  Now onto the links!

- On Monday, Chris Mitchell and Derek Albin of Pinstripe Pundits scored an interview with fringe prospect Rob Segedin, who's out for year with a hip injury.

- On Tuesday, el duque of It Is High... ranted on the lack of consistent offense and lack of real action to improve on the part of the front office.

- SJK of NoMaas perfectly captured Hal Steinbrenner's approach to building and running this year's team in one Photoshop.

- SG of RLYW pointed out the Yankees' losing percentage in games where they give up 2 runs or fewer as more undeniable proof of the offense's shittiness.

- Rob Abruzzese of Bronx Baseball Daily discussed how this season's down year for the farm system could come back to hurt the Yankees in 2014.

- On Wednesday, Michael Eder of IIATMS/TYA mused on the idea of MiL rehab schedules and how the differing approaches to handling them have and could continue to burn the Yankees this season.

- On Thursday, Michael Brown of Pinstriped Bible examined Vernon Wells' recent turnaround and how real it actually is.

- Brian Heyman of LoHud had the details on Travis Hafner's pitching machine snafu and comments from Pronk on his struggles.

- Matt Warden of RAB came through with round 4 of his "Potential 2013 Trade Targets" series.  I suppose it's time for me to start hopping on that train now too, huh?

- On Friday, Alex Belth of Bronx Banter had a perfect visual comparison for the tension in Yankeeland surrounding Derek Jeter's quad situation.  "Watchmen" references will always get you on the Palooza.

- Daniel Burch of The Greedy Pinstripes laid out his plan for the trade deadline.  Some of the moves make sense in theory, but judge for yourself.

This Friday's jam is "The Key To Gramercy Park" by Deadsy.  I remember seeing these guys open for KoRn when I was 16 and thinking they were going to be a big deal, even though the lead singer tried wearing a stage mic similar to the one in the video and it didn't work at all.  A synth rock fronted by the son of Cher and Gregg Allman that sounded like a Double-A version of Orgy not making it?  Who could have seen that coming??  As you can probably guess, 16-year-old me was not a professional music critic.  I still stand by this song and Deadsy's second album though.  Pretty good stuff.

Enjoy your weekends, everybody.  It'll probably be a slow one here for most of Saturday and Sunday.
Posted by Unknown at 2:14 PM No comments: 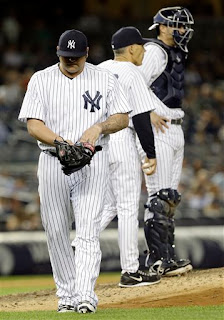 Those are Travis Hafner's monthly splits for this season, starting with April at the top and ending with his present production in the first half of July.  They are not encouraging.  His physical size and reputation are still enough for pitchers to tip toe around him when there are runners on base, but if they throw good stuff close to the plate there's not much Pronk can do with it.  In the season's first month he was worth 1.0 fWAR.  He's registered as a negative WAR player in each of the last 3 and now sits at just a .316 wOBA and -0.1 fWAR for the year.

Pronk was out of the lineup last night after fouling a ball off his foot and if the Yankees want to try to get anything out of him in the next 2 and a half months they might want to consider keeping him out through the ASB.  He has very little speed in his swing and very little pop in his bat when he does make contact.  He was a huge injury risk when the Yankees first signed him.  Now it appears like too much playing time has sapped him of his strengths as a hitter.
Posted by Unknown at 9:15 AM No comments: