Well I guess 23 out of 25 ain't bad, huh?  I thought I had it nailed down this morning, but the Yankees hit me (and I'm sure many others) with a few surprises today.  I covered some of this on the AB4AR Page earlier, but here's a quick recap of the day's roster events.

- David Phelps was named the long man out of the bullpen.  I preferred D.J. Mitchell but you really can't say this is a bad choice.  Phelps probably is a better pitcher than Mitchell and I always say bring your 25 best.

- Francisco Cervelli was NOT named the backup catcher.  Instead, he will be heading to Triple-A to replace Austin Romine while Romine recovers from his back injury.

- Replacing Cervelli on the 25-man will be former Snan Francisco Giant and Yankee MiL catcher Chris Stewart.  Stewart is an all-field/no-hit catcher if ever there was one, and he cost the Yankees George Kontos to get.  Kontos was possibly undervalued as a potential relief arm, but not a huge loss.

- OF Justin Maxwell was designated for assignment, a move that wasn't surprising but a bit disappointing considering what he brings to the table as bench insurance for Andruw Jones.  There's no chance he slips through the cracks like C-Dick did.  Even if he clears waivers, Maxwell can choose free agency over a Triple-A assignment.

- IF Bill Hall was granted his release.  He didn't have an out in his contract, but he requested it and the Yankees honored that request.  One less thing I'll have to complain about this season.

- 3 other guys on MiL deals- Doug Bernier, Jayson Nix, and Dewayne Wise- were not offered roster spots by other teams and so will be retained as emergency depth in Triple-A.
Posted by Unknown at 6:37 PM No comments: 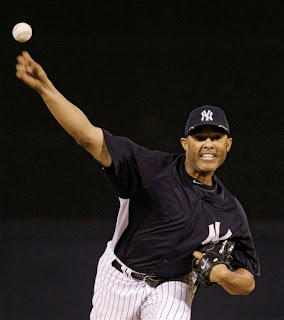 When last year's rotation was expected to be a weak link, the Yankees attempted to make up for it by signing Rafael Soriano and building a modern day version of the Nasty Boys in their 'pen.  The plan didn't exactly pan out, as Joba went down early with TJS and Soriano spent the bulk of the season either on the DL or being only marginally effective, but all in all the 'pen still ended up being a strength for the Yanks.  Mo was Mo, D-Rob stepped up in a big way to fill the void left by Joba and Sour Puss, and the rest of the group stepped up to provide quality innings.  The majority of that group is back in the fold this year, with a few new faces sprinkled in, and the Yankee 'pen should once again be a strength for the team.  With some breaking news today on the health status of one of the key pieces, there could be some last-minute changes coming to this group for Opening Day.  But relief arms are a position of depth for the organization, and if the Yankees could piece together a solid relief corp last season there's no reason they can't do the same this year.

No matter who's filling in the 6 spots behind him, the Yankee bullpen always starts and ends with Mariano Rivera.  This season could be the last time we're able to say that, but when it can still be said, that inspires a lot of confidence in the Yankees' ability to close out games.  Mo bucked his usual Spring Training trend this year by showing up earlier, starting his work earlier, and pitching in games earlier, and it doesn't seem to have changed the results one bit.  In 8 IP over 8 appearances this spring, Mo has allowed just 4 hits and has struck out 4 batters while walking none.  He did allow an earned run for the first time since 2008 in a recent outing, but even Mo isn't perfect.  He's healthy, his velocity and command is right where it always is, and he's right on track to have another dominant season.  He's coming at hitters with the cutter, they know he's coming at them with the cutter, and there ain't a damn thing they can do about it.  Every save he earns this season will be a record-setting one, and with the rest of the team around him there should be save opportunities aplenty for the G.O.A.T.

There isn't much drama in making these selections thanks to recent injury developments.  But since the rosters have to be set for Opening Day by 5PM today, I might as well submit the 25 players I think Joe will end up taking.  I'm sure he's been waiting for me to give him a few last-minute pointers anyway.  Probably not fair of me to keep him waiting any longer.

There you have it.  If I'm wrong, everybody gets one of the free AB4AR t-shirts that still don't exist. 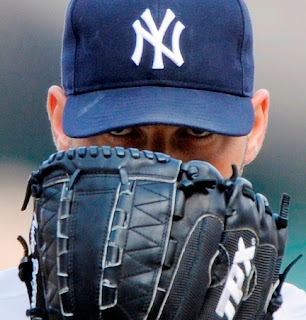 “I bounced back pretty good after that last one, so we feel like an inning would be good tomorrow. I realized I feel good enough to pitch.”

And with that statement, it became official that Andy Pettitte would pitch in Spring Training.  He's been working hard since the day he announced he was coming back- going through drills and exercises to build up strength, throwing bullpens, throwing BP, throwing simulated games- and now that tomorrow has become today and today Andy Pettitte will once again take the hill as a New York Yankee.

I know I wasn't as super-jacked as most other people about Andy's return when it was first announced.  I kept looking at it strictly from a baseball perspective, probably too much of a future baseball perspective, and I questioned whether mixing Andy in with the young stable of pitchers would help or hurt their development if they ended up being the one who was kicked out of the rotation for him.  As it turns out, that was the wrong way to think about it and it was an incredibly smart move to make by the Yankees.  For someone like Andy, it was wrong of me to put my fan side aside for the baseball side and question people's motivations.  Just another example of why Cash is making the baseball decisions I'm sitting at a desk writing a blog.

When Andy retired, I honestly thought it was for good.  The timing was right, he had nothing left to prove, and there hadn't been any hints that he was even remotely interested in coming back until he popped up at camp this year.  As much as we all didn't want to see him go, he really had no reason to stay, at least until last December when he got the itch again.  Now he's back, he's healthy, and he looks good so far, almost like he never left.

I have no way of knowing how Andy is going to pitch today against the Mets or this season against everybody else at age 40. None of us do.  But right now, I really don't even care about that.  This afternoon, something is going to happen that I never thought I would see happen again.  Andy Pettitte, one of my favorite Yankees of all time, is going to take the mound and pitch in a Major League Baseball game wearing the Yankee colors, and that's pretty damn cool.

(Quote courtesy of The AP)
Posted by Unknown at 8:00 AM No comments: