Via George King's report on the new Cano deal:

"According to three people who know Cano, he didn’t enjoy playing for manager Joe Girardi and that may have factored into the decision, though the Mariners giving him $60 million more than the Yankees offered ($175 million) likely had more to do with him leaving. ...

Come on, guys.  Do we really have to take the Boston route on this one and trash the guy now that he's on his way out of town?  Have a little class.  He was a great player while he was here, he did a lot of great things for the Yankees while he was in pinstripes, and he did exactly what any of us would have done if we had that kind of money on the table.  Like I said yesterday, it was strictly a business decision for both sides and there's nothing wrong with that.  Don't make it personal when it doesn't need to be.
Posted by Unknown at 5:02 PM No comments:

Get Ready For Another Rotation Competition 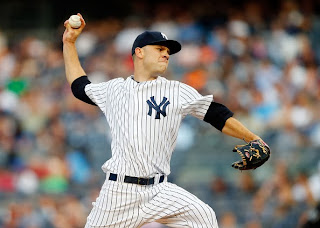 And this time it's going to be a doozy!  Buried in his post earlier this week about the Yankees making their new contract offer to Hiroki Kuroda, Andrew Marchand reported what we kind of already expected to happen with the 5th spot in next year's rotation.  With CC, Hirok, Nova, and hopefully Masahiro Tanaka manning the top 4 spots, the final spot will be determined by a Spring Training competition between Michael Pineda, David Phelps, Adam Warren, and Vidal Nuno.

So not only do we have 2 guys competing head-to-head for a spot like we used to with the now departed Phil Hughes and Joba Chamberlain, we're going to have us a good old fashioned fatal four-way battle for 1 spot.  What a slobberknocker!  In a perfect world, the Yankees would have enough confidence in Pineda to give him the job, since he was traded for with a top-of-the-rotation spot in mind.  But he was handled with extremely delicate kid gloves in his first year back on the field this season and Phelps has proven himself to be a capable 5th starter in limited work.

We've still got a few months before this battle starts, but if I had to say now I'd say the real competition will come down to Pineda and Phelps.  Nuno could be the dark horse as a lefty who showed some promise in limited innings.  I don't think Warren has a chance.
Posted by Unknown at 1:34 PM No comments:

Who Wants An Outfielder?

The Yankees said they weren't going to trade Brett Gardner after the Ellsbury signing, but with Carlos Beltran now in the mix as well it sounds like that plan is changing.  Andy McCullough reported yesterday that the Yankees are receiving "significant interest" in Brett Gardner and are at least willing to listen to offers for him.  Chad Jennings reported the same on Gardner and also reported that the Yankees are actively shopping Ichiro Suzuki, who's basically become the 5th outfielder at this point.

It's unclear what the Yankees would be looking to get back or could get back for either of these guys.  I have to think it wouldn't be much for Ichiro and less than it could be for Gardner because he's a year away from free agency.  Still, with as much outfield depth as they've accumulated this week it makes sense that the Yankees would go this route.  They have a ton of roster holes to fill and if one of these players can be used to help that effort that's probably the best way to get value out of them.  Personally, I'd trade Ichiro for a bag of balls and a souvenir soda cup if I could get that back and I'd hold onto Gardner.  With the 40-man roster completely full again, maybe one of them becomes part of a package deal for some starting pitching.  Just a thought...
Posted by Unknown at 10:54 AM No comments: