Obviously the correct answer is blowing the lead, because that takes a win off the board.  But you could also call it a trick question because getting kicked in the junk sucks equally every time it happens.

Soriano will get roasted tomorrow and rightfully so.  After tonight we can officially say he has sucked so far.
Posted by Unknown at 9:13 PM No comments: 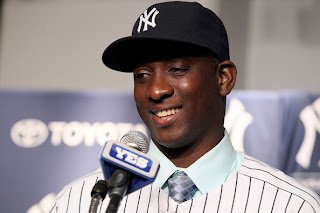 (I don't know what you're smiling about now, Raffy.)
Let me preface this by saying there is no statistical support for this post.  In fact, if you check Farnsworth's B-R page, you'll find that his first 10 appearances as a Yankee were actually far better than Soriano's, so this is strictly my personal opinion based on what I've seen so far.  But as I sat in my armchair last night watching/screaming at the TV during the 9th inning when Soriano idiotically, and almost smugly, pointed to the sky to let his infielders try and catch a pop up that landed about 10 feet from him for a leadoff single and then threw a horrible 2-strike pitch to Paul Konerko to give up the insurance RBI single, I was overcome by a strange feeling.  It was a feeling I haven't had for a few years now, ever since Kyle Farnsworth was traded, but it was that same feeling I used to have when he took the mound.  The feeling that I never know what is going to happen when Soriano takes the mound, and I instantly start thinking the worst when he's pitching.

His performances thus far have been rather Farnsworthian in their consistent inconsistency and their absolute inability to ever be somewhere in the middle.  Soriano started off with 2 strong outings, then had his 4-run meltdown against Minnesota when he couldn't throw a strike.  He followed that up with 2 clean outings and then had his 3-hit, 1-walk, 2-run near disaster against Texas.  And then last night he looked very shaky in the 9th inning of a 1-run game, effectively killing the chance of a Yankee miracle in the bottom half after having 3 pretty good outings prior.  All of that adds up to a 6.75 ERA, 6.13 xFIP, 17 baserunners allowed in 9.1 IP (7 via BB), and only 6 Ks.  Not exactly what I was expecting for $35 mil for 3 years.

But beyond the performances themselves, the approach has been the most frustrating thing about watching Soriano, and the thing that most makes me recall the horrible days of Farnsworth.  Soriano is inconsistent with his fastball location, he isn't attacking hitters with it because of the inconsistency, and when he does get ahead in counts he suddenly goes away from being aggressive with the fastball and tries to get cute with his slider, a pitch that hasn't served him well so far in 2011.  And as soon as a runner gets on base he becomes even more picky with his pitch selection and location and he gets himself into trouble.

Soriano is a power pitcher, and I understand that his fastball velocity hasn't quite been there early on, but that shouldn't change his approach.  Everything works off the fastball and when he's getting ahead in the count with it, he needs to stick with it.  If he's going to try for a corner, try with the the heater, not a sloppy slider.  Attack hitters, force them to take a defensive swing because they aren't sure if you're going to throw another fastball or waste a pitch.  Don't allow them to get back into a hitter's count by throwing junk and give them a fighting chance when they get to a point where they KNOW you're throwing a fastball.

All of this crap was enough to make me want to throw my beer bottle through the TV screen when Farnsy was the one doing it, and that was when I expected him to do those things because I knew he sucked.  Soriano does not suck.  He's a better pitcher than Farnsworth, with better stuff, but he's not using it to his advantage right now.  Dude needs to sack up and stop tip-toeing around hitters.

And for the love of God, get your sorry ass off the mound and catch the pop up next time!
Posted by Unknown at 12:43 PM 1 comment: