They're closing down the highway into Milwaukee this weekend so they can rebuild a section of train bridge.  It's the latest in the long line of highway upgrade-related work and delays that are going to plague the state of Wisconsin for the next few years.  I've already resigned myself to the fact that I'm going to forget that it's closed every time I go to get on the highway to get to and from my girlfriend's house this weekend.  It's going to be awful.  I am not a smart man.  Now onto the links!

- On Monday, Mike Axisa of RAB broke down the change Brian McCann made to his swing that was returning good results before the ASB.

- SJK of NoMaas showed why the Yankees should strongly consider being sellers at the deadline.

- On Tuesday, Matt Provenzano of Pinstripe Alley investigated the strange disagreement between Jacoby Ellsbury's defensive stats and the eye test.

- On Wednesday, Dan Barbarisi of The WSJ revealed the top answers to questions from his clubhouse survey.  Lotta good categories in here.

- Chad Jennings of LoHud summed up the Yankee first half in 44 sentences.

- On Thursday, Chris Mitchell of Pinstripe Pundits showed how a change in Brett Gardner's approach has led to a flip-flopping of his on-base and power outputs with no negative net change in his production.

- El duque of It Is High... lamented the major letdown that Carlos Beltran has been this season.

- Delia Enriquez of Bronx Baseball Daily identified the 6 biggest storylines of the upcoming second half.

- On Friday, Daniel Burch of The Greedy Pinstripes advocated for gutting the farm in the form of a big trade if the opportunity presents itself.  I would wholeheartedly agree.

- Katie Sharp of IIATMS/TYA dug deeper into the Yankees' team-wide struggles at home this season.

Going back to a familiar and favorite well for this week's Friday jam.  Queens of the Stone Age, "A Song for the Deaf".  Seems fitting.

Enjoy your weekends, everybody.  Look for that announcement on Sunday...
Posted by Unknown at 3:30 PM 1 comment:

Cash's Options To "Reinforce" The Rotation Are Limited 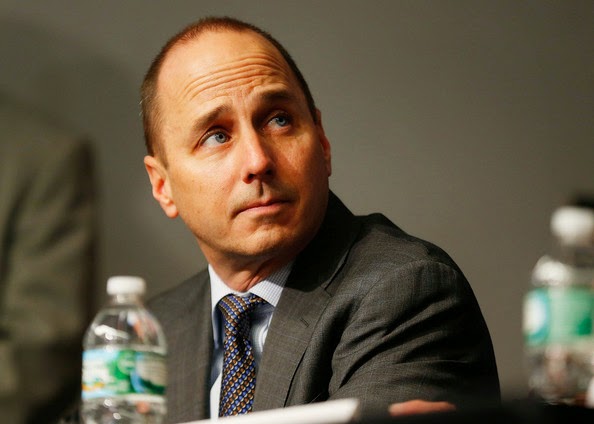 Cue up the Cashman hate train!

Less than 2 weeks from the trade deadline and on the eve of his 47-47 team getting their 2nd half underway against the Reds, Brian Cashman spoke to Andrew Marchand yesterday about the team's plans for said deadline.  It's been over a week since the Brandon McCarthy and Jeff Francis acquisitions and the trade front has been very quiet since.  The discussion of whether the Yanks will or even should be buyers or sellers has grown louder in that time, and Cash gave some insight as to which way they might be leaning with his comments.  It's exactly what you'd expect:

Yanks Need To Get Back To Having A Home Field Advantage

Home is where the heart is.  It's also where the advantage is supposed to be for a Major League Baseball team.  That hasn't been the case for the Yankees through their first 94 games of the 2014 season.  Of the 41 they've played at Yankee Stadium, they have an 18-23 record.  They've been oustscored by 45 in those games and outhomered by 11.  Those results cannot continue in the final 68 games.

The Yanks will play 41 of these final 68 games at home, the most home games remaining for any team.  They open the second half tonight at home against Cincy in the first of what will be 10 straight at The Stadium, their longest homestand of the season.  The schedule on paper is set up very favorably for the Yankees, which should be a help to them and their bare bones backup rotation, but that favorability will only extend as far as the team's performance on the field takes it.  They haven't hit well at home, they haven't pitched well at home, and they've had no home field advantage whatsoever this year.  That needs to change if they're going to make a run.

It's been over a month since he was drafted and about 3 weeks since he made his pro debut, but Jacob Lindgren is already starting to show why the Yankees were so high on him in making him their first pick of the 2014 draft.  He made his High-A debut last night and did so by striking out the side in a perfect inning.  For the season he's now pitched 7 innings across 3 different levels (GCL, Low-A, High-A), and he's given up 1 ER with 0 walks and 16 strikeouts in those 7 innings.

His stuff was considered MLB-ready by most scouts at the draft and it was universally agreed upon that he was MLB-ready as a lefty specialist the minute he was drafted.  The early small sample size results are exactly what you'd expect from a college reliever with that kind of profile.  Lindgren has been efficient and dominant against lower-level MiL hitters and I don't expect him to stay in Tampa for very long.  It will be fun watching him for the next 2 months to see how aggressive the Yankees get with him and whether he works his way up to a September call up.

Posted by Unknown at 7:52 AM No comments: