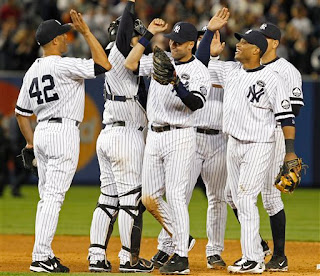 (Photo courtesy of The AP)﻿
- The 1st inning, despite the Yankees coming up scoreless, showed that they were in for some success against Duensing.  They hit 4 balls in the air, which is not what Duensing wants as a ground ball pitcher.

- Great at-bat by Cano in the bottom of the 2nd.  He squared up the pitch and just went with it as it was outside but caught a little too much of the plate.  It's at-bats like that that have people still saying Cano is going to win a batting title someday.

- Phil Hughes looked spectacular through 3 innings last night.  He was hitting his spots with the fastball, keeping it down in the zone, and getting ahead in the count.  Not to mention he was getting a lot of late swings on the fastball, so it had that trademark late life to it that Hughes thrives on.

- Flashback to the 1st inning and then think about what Swish and Teix did in the bottom of the 3rd.  They jumped all over pitches that were up in the zone and pounded them for hits.  A little bit of exorcising of the 2009 playoff demons for these guys in this series.

- From the "You Don't See That Every Day" Department: Mick Kelleher taking an errant throw right in the balls on Cano's infield single.  It looked bad on replay, but he ended up being OK.  Over/under on jokes about that play in the locker room:  15.

- The Marcus Thames homer in the bottom of the 4th: belt-high fastball on the outer half that, just like Cano's triple, caught too much of the plate.  Thames didn't try to do too much with it and just went with the pitch, depositing it in the RF bleachers.

- It was a painful night for Duensing, probably worse than his Game 1 loss from 2009.  He was up in the zone the whole night and couldn't consistently throw his off-speed stuff for strikes.  Biggest indicator of how bad he was: 0 swings and misses by Yankee hitters against him.

- Good stat by TBS in the 5th inning: the Twins put together back-to-back hits just once in the series leading up to last night's game.  They would put consecutive hits together in the 6th and 8th innings, but only had 1 run to show for it.  Tough to win when you can't string hits together, and tougher when the hits you do string are singles.  That stat is just as big a testament to how good the Yankee pitching was in this series as it was to how poorly the Twins hit.

- Big pitches by Hughes in the 5th after he got into a little trouble with 2 runners on.  He blew Cuddyer away with the fastball to strike him out and then challenged Valencia with a fastball up in the zone that Valencia couldn't get around on and he popped it up to first.  It was good to see Hughes stick with his bread and butter when he get into trouble.  Sometimes you want to see him change his approach a little more, but as good as the fastball was last night, that was the pitch to stick with and that's what he did.

- Speaking of changing things up, that's just what Hughes did with 2 on in the 6th, starting Jason Kubel off with a nasty curveball for a strike, then blowing him away with the fastball again.  After a while, the Twins almost seemed to resign themselves to the fact that they couldn't do anything with the heater and then Hughes mixes a curve in with RISP.  Brilliant call by the Yanks and great pitch by Hughes.

- More evidence of how keyed into the Twins' pitching the Yankees were last night: they didn't have their first 1-2-3 inning at the plate until the bottom of the 6th.  By then the game was pretty much over.

- Am I the only one that thinks the TBS commercial about the avocados where the baseball players and ump in the TV are yelling at the guy at the party is the lamest fucking ad ever?  Jesus Christ, that commercial sucks.  I feel uncomfortable watching it because it's so bad, like watching the tape from "The Ring" or something.

- Great swing by Swish on his homer in the 7th on a pitch that was low, but not quite low enough.  Also worth noting was the fact that that homer was the first time Ernie Johnson sounded excited calling a home run in the whole series.  Hey, better late than never.

- Despite the 6-run lead, it was a smart move by Joe going to Wood in the 8th.  His team was in command of the game, so you have to step on their throats and keep the pressure on.  Now Wood was completely awful as he couldn't throw the fastball for a strike and hung all of his off-speed pitches, but it was still the right move.

- Nice job by Boone Logan and D-Rob to clean up Wood's mess without furthering the damage.  They came in, attacked the hitters with fastballs, and got defensive swings for easy outs.  That's what they're there to do and they did it all series long.

- It's not even worth mentioning Mo closing out another playoff game, but I will anyway, just to remind all the people that said he was struggling and a question mark coming into the playoffs that he's Mariano Fucking Rivera, the best closer of all time.

- What can you say about Phil Hughes last night?  He was fantastic.  His fastball, which I said was the key to his success last night, was electric and he did a wonderful job of keeping it down in the zone and working both sides of the plate with it last night.  He rode it up the ladder when he had to, but for the most part he lived waist down with it.  There probably weren't more than 1 or 2 hard hit balls off of him last night and he did a great job of bearing down and sticking to his guns with runners on base.  Basically, he worked to his strengths and didn't try to do too much last night.  It's pretty good for your team when your 3rd starter gives you the best outing in the whole series.

- On the other side, the Twins obviously couldn't keep up with Hughes' heat last night, but I was surprised they never changed their approach against him.  They were content to just sit there and let him throw it for a strike, even if it wasn't strike 1.  At some point you have to take the bats off your shoulders and the Twins just didn't do it last night.  They stayed patient and let Hughes work himself into favorable counts where all they could do was put defensive swings on the fastball with 2 strikes.  Maybe it was them being committed to a gameplan, maybe it was them just giving up after they went down 5-0.  Whatever it was, it wasn't smart baseball and it made Hughes' job that much easier last night.

Play of The Game: Thames' 2-run HR in the bottom of the 4th

Just a crushing blow to the Twins, who were still in the game at that point despite it being painfully obvious that Duensing didn't have much.  It was only a matter of time before the Yankees struck big on him and Thames' homer was that strike.  He was looking first-pitch fastball and he did the best thing you could do with it.  That play seemed to suck the life out of the Twins and gave Hughes the cushion he needed to keep going out there and attacking with his fastball.

Player of The Game: Phil Hughes

How's this for a first career postseason start?  7 IP, 4 H, 1 BB, 0 R, 6 K in a series-clinching win.  Pretty damn good if you ask me.  Funny how you didn't hear anybody on TV this morning talking about the Yankees' questions in the rotation, wasn't it?

Well that was easier than expected.  One series down, 2 to go for Title 28.  Now the Yanks get a couple days of rest to watch Texas and Tampa slug it out in Game 5 and gear up for the ALCS.
Posted by Unknown at 5:24 PM No comments: