I really don't know what to say about the manhunt situation in Boston only to just say that I can't stop watching it.  I started last night, stayed up way later than I should have, and was right back online watching this morning at work.  I actually took a half-day to go back home and continue watching because I really wasn't of any value work-wise just casually faking my way through my job with one eye on my other computer screen.  It's an incredible, strange, and incredibly strange thing to watch play out in real time, like an episode of "24" come to life.  Never seen a multi-faceted law enforcement operation quite like this.  I just hope it ends soon and ends without any more American lives lost.  And now, since I'm trying to keep some kind of normal routine going, onto the links.

- On Monday, Chad Jennings of LoHud broke down the early storylines, both good and bad, and addressed what we still don't know about this team.

- On Tuesday, Dan Barbarisi of The WSJ followed the life of David Aardsma after his Yankee release and gave a really cool look into what happens for players in those situations.

- Mike Ashmore of Thunder Thoughts profiled Trenton OF Neil Medchill, an injury-plagued former quasi-prospect who's been quietly mashing under the Heathcott-Austin-Flores radar.

- Bryan Van Dusen of The Greedy Pinstripes wondered about Ichiro and what's in store for him after his slow start.  Like Bryan, I expect a bounce back, but not a big one.

- Mike Eder of IIATMS/TYA analyzed the small changes to Travis Hafner's swing mechanics that have helped him get off to his hot start.

- On Wednesday, Bryan Hoch of Bombers Beats compiled and presented the collection of at-bat songs for the currently active Yankees.  My rankings: 1) Nix, 2) Francisco, 3) Boesch.

- Chris Mitchell of Pinstripe Pundits mused on Francisco Cervelli's strong start and what it might mean for Cervelli moving forward.

- On Thursday, Mike Axisa of RAB commented on the transitional period that CC Sabathia might be starting to go through.  I'm still holding out hope that his fastball will heat up with the weather, but it does look like CC is starting to lose some of his juice as he moves into his mid-30s.

- Greg Kirkland of Pinstriped Bible praised the Yankees' solid early defensive performance, which is worthwhile praise IMO.  While they'll never be considered a great defensive team, they haven't shot themselves in the foot yet.

- Hunter Farman of Yanks Go Yard listed some other back end rotation options should Nova and Hughes continue to struggle.  Probably a little early to think about that, but it never hurts to be prepared.

- On Friday, el duque of It Is High... asked a pretty simple and intelligent question about Derek Jeter's comeback and the high expectations that came with it.

- Raimundo Ortiz of Bronx Baseball Daily reminded everybody of how valuable Brett Gardner is right now.  Well-rounded piece by Raimundo, and if you still think Gardner and his defense aren't valuable, you're an idiot.

- SG of RLYW compared the production projections for Jeter and Nunez over a full season to see how much the Yankees stand to lose at shortstop while Jeter is out.

For today's Friday Jam, we're going with a little old school Boston.  Just seems right after all that's gone on this week, and I have to think the people of the Boston area are going to need to blow off some steam and relax when this asshole is caught.

Enjoy your weekends, everybody.
Posted by Unknown at 2:18 PM No comments:

Did Phil Pitch Inside Last Night? 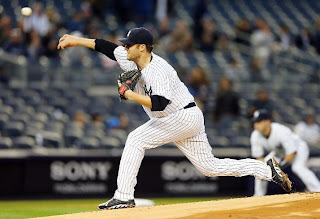 After his downright disastrous start last Saturday, I took a venture into the PITCHf/x realm on Monday and determined that, for whatever reason, Phil Hughes was not pitching inside to hitters.  He really hadn't shown stellar command of his 4-seamer in either of his first two starts, and the fact that he was working away and missing away made it much easier for hitters to look for a certain pitch in a certain area and tee off on it.  Having done that analysis just a few days ago, I couldn't very well sit by and let his start last night go un-analyzed.  So let's play another round of America's newest favorite Yankee-related game, "Did Phil Pitch Inside Last Night?" 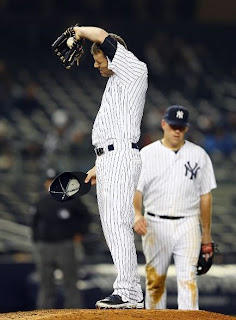 If you would have asked me before the first game of the season, I don't think I would have said I ever expected to see a 7-1 stretch of ball from this squad, especially not with how slow and lifeless they looked to start the season.  But lo and behold, here we are, with the Yanks in that position and doing exactly what they need to do while their injured heal.  They've had better starting pitching, a red hot Robbie Cano, a solid collective offensive performance from the rest of the lineup, and relatively clean defense.  They had a series sweep on the line against the Diamondbacks last night, and Phil Hughes was tasked with making it happen.

- Hughes got off to a great start, giving up just one single in the 1st and retiring the 2nd in order with 2 swinging strikeouts.  He was mixing pitches and he looked comfortable.

- As he's apt to do, though, Hughes gave up a leadoff HR in the top of the 3rd on a thigh-high 1st-pitch fastball down the middle.  He recovered to get out of the inning and the next 2 unscathed, and worked around runners on 2nd and 3rd with 1 out to do it in the 5th.

- The offense wasn't showing much early against Patrick Corbin.  They got a few walks here and a single there, but he had sat down 7 in a row and kept the Bombers scoreless through 5.

- The bad pitch bug came back to bite Phil in the top of the 6th on an atrocious 1-1 fastball.  It really was an unforgivable pitch and Martin Prado made him pay for a 2-0 D-backs lead.  Hughes bounced back again to finish that inning and go 1-2-3 in the 7th for what was, all in all, a good start.

- Robinson Cano got the Yanks back in the game with his 5th homer of the young season in the bottom of the 6th, but he couldn't come through with the bases loaded and 1 out in the 8th, instead striking out on a pitch that hit him.  Kevin Youkilis struck out too and the Yanks went to the 9th down 1.

- And there waiting to save them was Francisco Cervelli.  With 1 out in the 9th, Frankie stepped in and hit a 1-2 pitch over the plate into the left field seats to tie the game at 2.

- The game went to extras, where the Yankees were unable to come up with anything.  D-Rob handled the 10th and gave the ball to David Phelps, who wiggled out of trouble in the 11th but gave up 4 in the 12th for the loss.  Just didn't seem to have his best stuff.  Oh well.