The Saddest Shortstop Platoon Ever

I tried to put a little polish on the turd that was the Reid Brignac acquisition this past weekend.  Mike Eder tried like hell to put about 4 more coats of super polish on it over at IIATMS/TYA yesterday.  In a world of teeny-tiny, barely there marginal upgrades, Brignac did and does represent a step up from Alberto Gonzalez, and there's something to be said for that.  But the plain fact of the matter is that Brignac is a .260 wOBA career hitter who rates out negatively on defense, Nix is a .286 wOBA career hitter who rates out negatively at the position the Yankees need him to play, and the thought of them teaming up to play the position that Derek Jeter has held down for the majority of my life on this planet is depressing as hell.

Reid Brignac sucks at baseball, Jayson Nix sucks at baseball, and together they are going to combine to be the most sucktastic shortstop platoon in recent MLB history.  The nearly-as-bad-as-them Eduardo Nunez is somehow still an upgrade from them if and when he comes back from the DL.  That's how low things have gotten without Jeter this season, and it's a sad preview of what's to come when life without him finally begins.
Posted by Unknown at 4:27 PM No comments: 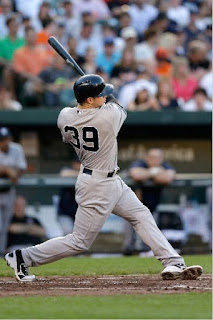 Michael Pineda has been pitching in simulated and Extended ST games for exactly 4 weeks now.  He's gotten positive feedback from all the coaches who have seen him throw, was reported to be throwing mid-90s earlier this month, and is now having his ExST starts stretched out (51 pitches in his last outing) in anticipation of starting his offical 30-day MiL rehab stint soon.

Those details come courtesy of Ken Davidoff, who reported yesterday that Pineda "received strong reviews"  from his latest outing on Saturday.  The plan is to have him pitch once more on Thursday and next Tuesday to extend his pitch count before starting his rehab assignment.  That would put him on track to make his first rehab start either on June 2nd or 3rd depending on the schedules and which affiliate he's assigned to and his return to the Major League roster sometime in early July if everything goes according to plan.

David Phelps is doing a nice job filling in on the back end right now, but between Andy's back issues and Phil Hughes' recent struggles there are still plenty of opportunities for Pineda to work his way back in.  This latest development puts a somewhat definitive timeline on when we could see him finally make his Yankee debut. 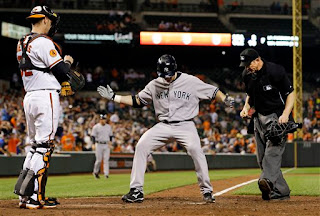