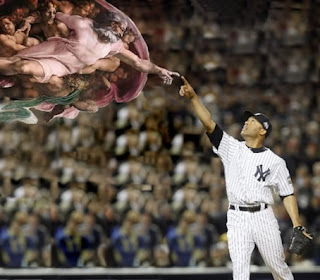 (I still don't remember where I first saw this, but courtesy of whoever was smart enough to put it together.)
Quotes via Chad at LoHud.﻿
Posted by Unknown at 2:33 PM No comments:

There's something gratifying about being an adult and a professional and knowing that you can pretty much make all your own decisions about what you're going to do and not do and when and where you're going to do those things.  For example, when I'm not working I can go and drink as many beers as I want to.  The Fraud Sawx won't be so luck this year, as Bobby V finally announced the clubhouse beer ban yesterday afternoon to the team.  This was pretty much an inevitability after last September, but that doesn't make it any less funny.  Especially when Valentine had this to say about making the decision:

"It's just what I've always done, except in Texas, I guess.  I'm comfortable with it that way."

Yeah, it's just what he's always done, except for that one time that he didn't do it with one of the other teams he managed, he guesses.  Those guys were mature, responsible adults who recognized that knocking a few back in the clubhouse wasn't the most professional thing to be doing when you're an athlete making millions of dollars to play a game.  They didn't have to be treated like children.  But for the other two out of the three total Major League teams that he's managed, this is what Bobby V has always done.  Always.

Big Sloppi was the biggest and most vocal supporter of the new rule, saying this to reporters:

Damn right, Sloppi.  It definitely ain't a bar.  And you're definitely not there to drink; just to play baseball.  And maybe also to take steroids so that you can play baseball better, you're there to do that.  And to cause fights with the other team when you don't like getting pitched inside.  And to interrupt your manager's post-game press conference to whine about your stats being changed.  All of that, and baseball.  That's all you guys are there to do.

Absolutely hilarious.  That's what this is.  Over half of the other teams in MLB already have beer banned in their clubhouses and it's never been a story.  The Fraud Sawx are basically forced to after last year's collapse and it's front page news.  You gotta love men being treated like men.  What's next?  Impromptu D.A.R.E. meetings in the clubhouse after a tough loss?

Don't worry, boys.  You might be stuck in the dry county that is your clubhouse now, but I'll make sure to always keep a few on hand in my fridge to keep the memory of the fall of 2011 alive.  Cheers, dickheads!  Enjoy the Gatorade. 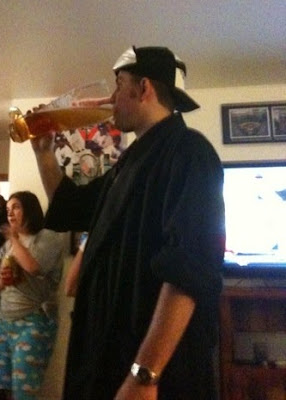