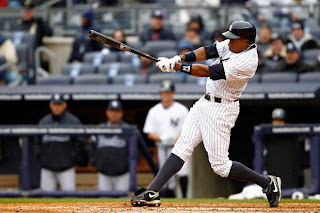 (Ain't that pretty?  Courtesy of Getty Images)
More stuff on yesterday's game that I didn't get to touch on in the live blog:

- It was tough to make a judgement on Jeter's new swing after yesterday's game.  Obviously you can't make any kind of solid judgement after just one game, but he didn't look all that spectacular.  A couple decent swings but not a lot of solid contact.

- Yesterday's game was a textbook example of the classic Yankee patience that everybody talks about.  They forced Detroit pitching to throw 149 pitches in 8 innings, they drew 5 walks, and nobody in the lineup saw fewer than 13 pitches.  Considering the man with 13 was Brett Gardner and there were 2 times that he was up there to lay down sac bunts, that's pretty damn good.  Teix, A-Rod, and Cano combined to see 62 pitches in their 12 plate appearances and drew 4 of the team's 5 walks.

- Both CC and Verlander seemed to suffer the same afflictions yesterday.  Neither could consistently locate the fastball where they needed to, despite having good velocity, and neither could ever completely find the command on their offspeed stuff, most likely a byproduct of the bad weather and the fact that it was their first outing of the regular season.  The difference was CC's ability to throw strikes.  70 of his 106 pitches were strikes compared to just 65 of Verlander's 115.  Verlander's first and last innings of work were his undoing as far as pitch count.

- Hell of a day for C-Grand, who should no signs of lingering oblique issues.  He looked good at the plate even before the homer (which was awesome), and was all over the place in the OF.  His shot in the 7th marked the 3rd straight year he has hit an Opening Day home run, which is pretty cool.

- I didn't know what to expect when they signed him, having been crossing my fingers that he was going to be healthy since he started catching, and still don't know what the future holds, but I was thoroughly impressed with Russell Martin yesterday.  He looked fluid, smooth, and quick behind the plate, he looked comfortable and confident at the plate, and showed some wheels on the steal of 3rd in the 3rd inning.

- Before his insurance RBI single in the 8th, it was a rough day for Swish at the plate.  The Tigers were working him away hard, especially Verlander, and he couldn't do anything to adjust.

- The last 3 innings were exactly what Yankee fans and management envisioned when they signed Soriano.  Just a complete lockdown performance by all 3 guys.  When everyone's arms really warm up and they find their stuff completely, this bullpen is going to be SCARY good.

- Interesting to see Joba get the call in the 7th over D-Rob.  I just assumed with his injury and the way last season finished that Joba had been kicked down the ladder, but he's clearly shown Joe enough in ST for Joe to have confidence in him and he rewarded that confidence with a solid 7th inning.  But is this really a sign that Joba is moving back up the ladder within the bullpen pecking order or are the Yankees trying to drive up his trade value?

- The Horse already has people scared that he's going to kick them in the teeth.  Nobody on the Tiger staff wanted anything to do with him at the plate yesterday.  Clearly people were taking notice of how he was mashing the ball in ST, so maybe it does mean something after all.

- I still haven't figured out what Robbie was doing/thinking when he dropped that toss from Teix on the bunt attempt.  Catches don't get much easier than that.  Guess he'll have to start a new error-less games streak on Saturday.

- Does it make me a bad person if I always root for Daniel Schlereth to get bombed or take a comebacker off the knee every time I see him in a game just because he's related to Mark Schlereth, arguably the worst analyst in ESPN history?  If it does, then so be it.  I hate Mark Schlereth.

-Yesterday's win was so textbook for the Yankees that it's hard to really pick nits.  The only thing that sucked about it was that they aren't following it up today and I have to wait until Saturday.
Posted by Unknown at 7:55 AM 2 comments: