Well after a month of crappy play, and a few weeks of play even worse than that, the Yanks clinched tonight and secured themselves a berth in the playoffs and a chance at Title 28.

They had to use their A+-team to do it, playing all the regulars, starting CC, having him throw 8.1 innings, and having Mo close out the last 2 outs, but to get into the dance makes it worth it.

Now they just have to figure out how the fuck they're going to make their ALDS rotation work after starting CC tonight, but we'll deal with that tomorrow.  For now, everybody just pop the champagne and celebrate.  I know that's what I'm doing.
Posted by Unknown at 10:07 PM No comments:

Hey, At Least People Are Showing Up To The Stadium

The Rays are a few victories away from clinching the division and guaranteeing homefield advantage throughout the AL playoffs, but apparently their fans could give a fuck less:

"When 12,446 fans showed up Monday night to see if the AL East-leading Tampa Bay Rays could clinch their second playoff berth in three years, Evan Longoria decided he'd seen enough empty seats -- and said something about it.

Longoria, who did not play in the Rays' 4-0 loss to Baltimore, spoke at length about the team's chronically low attendance, calling it "disheartening" and "embarrassing."

"We've been playing great baseball all year. Since I've been here in [2006], the fans have wanted a good baseball team. They've wanted to watch a contender," Longoria told reporters. "And for us to play good baseball for three years now, and for us to be in a spot to clinch again and go to the playoffs, we're all confused as to why it's only 15,000 to 20,000 in the building."

His teammate, pitcher David Price, had the same feeling. A post to his Twitter page after the game read: "Had a chance to clinch a post season spot tonight with about 10,000 fans in the stands....embarrassing."

Instead of getting into the discussion of how stupid it is to start CC tonight and make myself more frustrated about the Yankees' current situation, I'm just going to sit back, relax, and enjoy this story.  Division title or no division title, we as fans and the Yankees as players can all take solace in the fact that the Yanks will have a decided homefield advantage both at home and in Tampa, where there probably won't be more Rays fans than Yankees fans at the games.  Now that we know the Rays' fans don't care about their team, we can breathe a little easier about having to go there and face them in their own place for 4 games if it comes to that.

Not to mention the fact that with all the added revenue coming from the Yankee fans flooding The Trop, the Rays will have a little extra money in their pockets.  To show their appreciation, the least they can do is just lay down and die peacefully in the ALCS and let the team, and the fanbase, that deserves to see another World Series move on.
Posted by Unknown at 2:21 PM No comments:

Did A.J. Pitch Himself Out Of The Playoff Rotation Last Night? 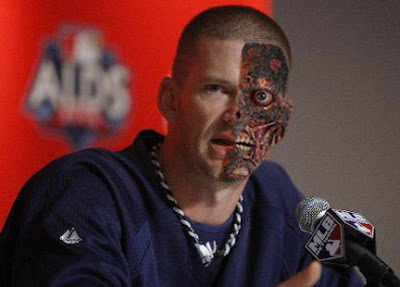 (Been seeing way too much of the bad side this season)
For starters, I will say that if it were up to me, the answer to that question would be a resounding "YES."  In a year of a few ups and mostly downs, A.J. came out last night and laid his biggest egg of the year in a game the Yankees could have used to clinch a playoff berth.  For once I was glad that I live out in Wisconsin and didn't have access to the YES network because I would have assuredly trashed my TV and everything else in my apartment if I had to sit through that fucking abortion of a pitching performance last night.  To anybody who was unfortunate enough to witness it, my thoughts and prayers are with you.  Be strong, it's not your fault.  Everything is going to be OK, but you might want to contact a helpline or some kind of service reserved for victims of harsh mental abuse.

But back to the matter at hand.  What does Joe do with A.J. now?  He's clearly down to his last shred of confidence, if he didn't use it up last night, and you would have to think that his teammates' patience with him is wearing a little thin.  There's only so many times you can go out there as a competitor and have your chance to win ripped away from you before you even have a chance to get in the flow of the game before you start to just say "fuck it" and prepare for the worst when A.J. is on the mound, and it looks like that's where the Yankees are after last night.  Sure they hit a few homers to make the game seem close, but there was very little punch or energy in their lineup last night.  When Marc Rzepczynski, he of the 5.75 ERA, shuts you down for 5 innings with 9 Ks, that points to the offense just laying down and dying after being staked to a 7-0 deficit by their starting pitcher.  And honestly, I can't say I blame them.

So with the combination of his horrific pitching and the obvious negative impact it has on the rest of the ballclub, how can Joe risk putting A.J. out there in the playoffs?  He won't have to use him in the ALDS thanks to the scheduling, nor should he use him.  CC, Phil Hughes, and Andy have more than earned their spots with their performances this year and track record in the postseason (mostly for CC and Andy).  But with the switch back to the 2-3-2 format for the ALCS, Joe won't be able to get away with using that 3-man rotation, unless he wants to risk throwing all 3 of them on short rest for the series, an idea that doesn't look too good when you consider Hughes' youth and innings count and Andy still on the recovery path from his groin injury.  Joe is going to need a 4th starter, but should that starter be A.J.?  Sure, when he's on he's awesome.  But those times of being on have been few and far between this year, and if you ask me, I'd rather take 4-5 innings of 3- or 4-run ball from Ivan Nova than take my chances with A.J.  The risk of another 2- or 3-inning meltdown is not worth the potential reward of a solid outing that he may turn in.

A.J. doesn't seem to be able to fix A.J., and nobody else does either.  And quite frankly, at this point in the season, fuck, at this point in his CAREER, we shouldn't be having this conversation.  A.J. Burnett is what he is, and what he is is a shitty pitcher with no confidence, no mental toughness, and no ability to locate his pitches anywhere other than right down the middle of the plate.  He's 10-15 on the year with a 5.33 ERA, 4-13 with a 6.67 ERA since the end of May.  Numbers like that get you sent to Triple-A or released on most other teams, but in New York this year it's gotten A.J. $16.5 million and a season-long spot in the rotation.  Now that we're getting into the time of the year that really matters, though, that shit like how much a guy makes shouldn't count towards anything.  The fact is, A.J. hasn't earned the right to start a playoff game, and unless he goes out on his last start of the regular season and throws a complete game shutout, Joe shouldn't reward him with a start that he didn't earn.
Posted by Unknown at 9:38 AM No comments: