Oswalt On A One-Year Deal? Absolutely!

It's real simple.  If this report from Jerry Crasnick is true, and all indications are that it is, then Brian Cashman should be on the phone with Roy Oswalt's agent right now.  And within a few days Roy Oswalt should be the newest member of the New York Yankees.  Because right now, Roy Oswalt is exactly what the Yankees are looking for in every way.

In Oswalt, the Yankees are getting just the type of player they need, a true top-of-the-rotation stud.  And not just one with a couple good seasons under his belt, but a real true stud.  A guy with All Star Games and big postseason performances and Cy Young votes under his belt.  Inserting Oswalt behind CC in the rotation immediately makes it better AND deeper than it is right now.  And in Oswalt, the Yankees are getting a guy who is highly motivated and will be busting his balls to pitch well and have a great year.  Oswalt's no fool.  He knows there's no market out there for him right now for a multi-year contract because he's such a ticking time bomb with his bad back.  If he can have one good year where he's healthy the whole time, he can probably convince a club to give him one more multi-year deal before he retires.  He won't be coming in just to hang on and collect a paycheck; he's playing for a career.  Bad back or not, "former ace and Cy Young candidate with a huge reason to pitch well" = "Good Investment."

And if it doesn't work out?  He gets hurt again, misses a lot of time, misses the season, whatever.  You know Cash wouldn't be stupid enough to move A.J. or Hughes because he would want a contingency plan for Oswalt, so the rotation would be right back where it would have been if the Yankees didn't sign Oswalt, which is where it is right now.  And on a one-year deal, Oswalt poses little or no threat to the Yankees' continuing-to-become-more-apparent plan to cut payroll for 2014.

But if it does work out, and Oswalt comes into camp in great shape, stays healthy throughout the season, and pitches to the ability of his still-very-existent talent?  Then the Yankees have to get vaulted right back to the top of the list of World Series favorites.  And Joe can feel a hell of a lot more confident coming up with a postseason rotation in 2012.

Anything between those two outcomes is gravy, even if it's just a handful of starts, because it would almost assuredly be better than what A.J. would give the team as a 5th member of the rotation.  And when you know it's a one-year deal, you just hope for the best and know that no matter what happens, you're out from under it and free after one year.  It's basically the same situation the Yankees were in last offseason when they signed Freddy and Bart.  And even at more money, Oswalt is still a better investment than many of us thought Colon and Garcia were because of the higher reward potential.

We look at the rotation and we see a lot of 3s and 4s, most of them with question marks attached related more to how much worse they'll do in 2012 than better.  Roy Oswalt is a no-doubt upgrade over all of those guys and he's available for a one-year commitment.  If the Yankees are or were considering giving $12 million for one year of Hiroki Kuroda's services, then they shouldn't even have to think about picking up the phone to make a similar deal to Oswalt.
Posted by Unknown at 7:42 PM No comments:

Nick Swisher will head into the 2012 season on the last year of his current contract, one that has been incredibly friendly to the Yankees considering the production they have gotten since fleecing Kenny Williams trading for Swish prior to the 2009 season.  In typical Yankee fashion, they have not  discussed a new contract for Swish, instead choosing to pick up his 2011 option and then see where they are after the season.  That could end up working out well for Swish if he has a big year in 2012, but that won't be known for months.  What is known is that two players comparable to Swish both signed new contracts this past week, essentially laying the groundwork for a starting point to Swish's new contract.

Josh Willingham took a 3-year/$21 million deal from the Minnesota Twins to replace the departed Michael Cuddyer, who then signed a 3-year/$31.5 million deal with the Colorado Rockies.  If we're using these two as a measuring stick for Swish, at first glance it appears that we're looking at three incredibly similar players. 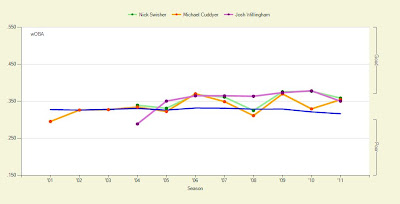 The advantage that Swish has over his counterparts is time, both in terms of the time he has on his side as a younger player and what he's already done with the time he's spent in the Majors.  Swish will be 31 next year, still in his physical prime, while both Cuddyer and Willingham will turn 33 before Opening Day 2012.  Those 2 years in hand put Swish in a much better position to demand more years and more money.  And looking at what Swish has already accomplished in a similar span of years helps to further separate him from Cuddyer and Willingham.  When these 3 players are compared in terms of WAR, the gap between them starts to increase in Swish's favor. 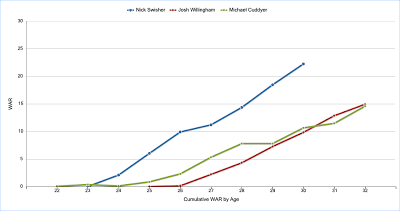 In a comparable amount of playing time, Swish (blue) has racked up significantly more cumulative WAR than both Cuddyer (green) and Willingham (red).  This added value for Swish can be attributed to his durability (at least 131 games played in every season since his first full one in '05 and at least 150 games played in every season since '06), his higher BB rate (13.5% career), and Swish establishing himself as an above-average defensive player at multiple positions over the span of his career.  Swish has provided positive defensive value as a corner outfielder and first baseman while Cuddyer and Willingham haven't done anything to get themselves confused for Gold Glovers anywhere in the field.  Not only is he younger, Swish is a more well-rounded baseball player who produces at a higher level.

That being the case, what kind of deal can Swish expect to get if guys who rate lower than him are pulling in 7 and slightly over 10 mil per year in their new deals?  As a player who will still be younger than Cuddyer and Willingham were this offseason, and one who has a better health track record, a 4-year deal should be expected to be the minimum offered to Swish in terms of contract length, with 5 not being out of the question if he has another good season in 2012.  And if he does continue his 3-year trend and have another good all-around season, Swisher would be in position to expect a significant boost in salary from the $10+ million he'll make this coming season.  $14-15 million per year wouldn't be out of the question, perhaps more if some teams were really interested in Swish's services.

And this is where things could get interesting for the Yankees.  One way or another, they're going to need a right fielder after the 2012 season unless they break their normal operating procedure and negotiate with Swish during the season.  But if the Yankees are serious about getting down to $189 million in payroll for 2014, which seems more and more likely with each passing day, then a "4-5-year/$15ish million per"-type contract might not fit into those plans.  As Larry Koestler pointed out yesterday, the OF free agent market in 2012 isn't a particularly deep one, so Swish very well could be the best available right fielder.  And there isn't anybody in the upper levels of the Yankee system who they can expect to step into the full-time RF role in 2013, unless Zoilo Almonte or Melky Mesa go completely off-the-charts H.A.M. in 2012.  Swish is going to have all the bargaining power with the Yankees and the Yankees are going to have a serious decision to make with Swish.

They could try to paint with broad strokes like we did earlier, show how Swish's career offensive numbers compare to guys like Cuddyer and Willingham, and attempt to lowball him on an offer for $10-12 million a year.  But if he posts his fourth straight season of 3-4-WAR production, Swish and his agent will know he's worth more than that, and they'll be proven right when other teams who are interested offer more.  If the Yankees weren't willing to get involved with a pitcher in his early-30s this year when the price was around $15 million per for 5 years and they had a clear need for rotation help, how likely are they going to be to get involved with an outfielder in his early-30s for the same figures when they don't have a clear need for offensive help?

There's a lot that could happen that could affect this situation once the season begins.  Swish could get injured and miss a lot of time, the Yankees could have some big improvements or regressions from some key lineup members in 2012 that could make losing Swish's production easier or more difficult to handle in 2013.  Who knows?  But right now, with the deals Cuddyer and Willingham got, and how favorably Swisher compares to them as a baseball player, the price and negotiating power in a deal are both increasing for Swish.  And if the Yankees have a desire to include Swish in their future plans AND trim payroll, that might not be a good thing for them.

I know it was only 5 days ago, so it's not like I possess any kind of real prognostication skills, but I do recall making this statement after the bidding period closed for Yu Darvish last week:

"With some estimates on the winning bid being in the $40-50 mil range, there isn't much chance the Yankee bid will be the winner.  Smart money would be on the Rangers.  After losing Wilson they have the biggest need for a high-end starter."

Haha, how do ya like them apples?  Didn't need any fancy insider information or anonymous league sources, just good old fashioned logic and my keen Polish intellect.  Yes sir, I can smell a job offer from ESPNNY on the horizon.  Andrew Marchand and Buster Olney better watch their fucking backs because I've got my finger on the pulse of Major League Baseball.

P.S.- $51.7 million just for the rights to negotiate with the guy???  I know I said the Rangers needed a top-flight starter, but that's a serious price to pay.  By the time the contract gets done, they're looking at $100-120 million committed to Darvish.  That makes it a little more understandable as to why the Yankees didn't get heavily involved.
Posted by Unknown at 7:37 AM 2 comments: