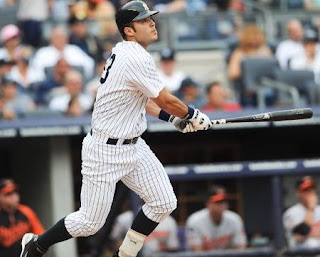 (Best bench player ever?  Probably.  Courtesy of The Daily News)
As I stated in the bench season preview post, the 2011 version was expected to be better than those of '09 and 2010.  The Yankees added some experience in Andruw Jones and Eric Chavez and seemed committed to giving Eduardo Nunez a real shot to prove his worth as a potential everyday player.  They were covered at all spots on the roster and had the flexibility to platoon against left-handed pitching without sacrificing productivity.  For guys who are only expected to fill in as needed, the bench in 2011 lived up to that job and then some.

Nunez was expected to back up the left side of the infield this year, and thanks to injuries he actually ended up playing more than the Yankees originally intended.  As far as auditions for a future role go, Nunez achieved mixed results in 2011.  In 338 PA he showed a little oomph with the stick, hitting .265/.313/.385 with 25 XBH, good for a .313 wOBA.  Nunez also stole 22 bases, which helped make the Yankee offense a bit more dynamic when he was at the bottom of the lineup.  He certainly didn't make anybody forget about Jeter or A-Rod, but Nunez wasn't a complete black hole at the plate.  His problems are all field-related.  I can't think of any other way to say it than to just say that Nunez was a disaster defensively.  He committed 20 errors on the year, 12 fielding and 8 throwing, and by the end of the year he had Yankee fans cringing and covering their eyes every time the ball was hit his way.  The horrific fielding ended up bumping Nunez down to a -0.6 WAR, and probably locked him into a career backup role, at least with the Yankees.

Any time you can add 2 former All Stars and Gold Glove winners as backups, that's a good thing.  And that's just what the Yanks did with Andruw Jones and Eric Chavez this year.  Jones was brought in to replace Marcus Thames as the "vs. lefties" 4th OF and he did that job even better than Thames did in 2010.  For the year, Jones hit .247/.356/.495 in 222 total PA and .286/.384/.540 in 126 AB vs. LHP, good for a .371 wOBA overall.  And as an added bonus he played above average defense, something Thames can only dream of, and racked up 1.4 WAR in his limited playing time.  Chavez managed to give the Yanks 175 PA thanks to injuries, and while his .256/.320/.356 line wasn't all that productive, he played solid defense at the hot corner and helped keep things moving along while A-Rod missed his time at 3rd.  It remains to be seen if either of these guys will be back for 2012, but there's no denying that both were more valuable to the lineup this year than Ramiro Pena and Thames were last year.