He wasn't having that great a start to begin with, but it just got worse for Andy Pettitte when he had to leave tonight's game with 2 outs in the top of the 5th inning.  Pettitte had just thrown a pitch to strike out his second straight batter of the inning and appeared to grimace on his last pitch.  Joe didn't take any chances and removed Andy from the game.

It would be unfair to speculate, but the first place you think of with Andy is his back.  He's already missed a few starts due to back spasms this year and those type of problems don't just go away when you're his age.  More on this story as it becomes available.

** UPDATE 5/17 6:50 AM- The team announced that Pettitte left last night's game with a tight left trap.  After the game, Joe said he wasn't too concerned about it, so that's good news.  It was not said whether Pettitte will miss his next start. **
Posted by Unknown at 7:37 PM No comments:

There you have it.  36 pitches, 17 swings, 0 misses, 6 hits, 2 walks, 7 runs.  Phil Hughes joined a couple of select clubs in historical Yankee and baseball futility last night and it's not difficult to see why.  He was fastball-heavy again, and left almost all of them either right in the middle of the plate or way off the corners.  To make matters most, a lot of those fastballs middle and away as you right to left were thrown to left-handed hitters, putting them in perfect position to extend their arms and make solid contact, which they did.

It'd be easy to try to tie this back to Hughes' issues throwing inside or his need to work his offspeed stuff more, but that would be a moot point in this instance.  His offspeed stuff was just as bad, dropping right over the heart of the hitting zone or way off the corner.  Phil just had nothing last night, and it was the latest in a long line of examples of how frustrating his "hot and cold" career as a starter has gone.  As I mentioned earlier this morning over at IIATMS/TYA, if Hughes has officially settled at his ceiling of #4 starter, he might not be looking at offers as big as once thought after this season.

(Pitch plot courtesy of Texas Leaguers)
Posted by Unknown at 1:00 PM No comments:

The One Good Thing To Come Out Of Last Night

The good news? Preston Claiborne is using "When The Levee Breaks" as his entrance music. Excellent choice.
— Andy McCullough (@McCulloughSL) May 15, 2013


I've already signed my application forms to join the Preston Claiborne bandwagon based solely on his performance since being called up.  The kid still hasn't given up a run in 5 appearances and has looked really good in every outing, with 4 strikeouts and not a single walk on his ledger.  He's throwing strikes, attacking hitters, everything you want to see from a young reliever.  Now that I know he has excellent taste in music and comes out to a super badass song for his entrance music, I'm putting a rush on submitting those forms.  I need to be officially recognized as a Preston Claiborne fan.
Posted by Unknown at 10:29 AM No comments: 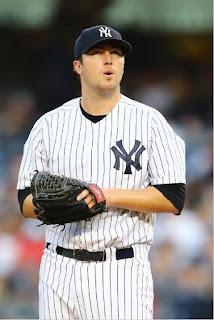