That Looks Much Better

Something funny happened in the 8th inning of last night's game, funnier than Al Albuquerque's balk and even funnier than his wild pitch into the stands.  Alex Rodriguez got 2 hits in the inning, his first and second of the series.  And not only that, he looked damn good doing it.  Up until those hits, I've been banging the "A-Rod is hurt" drum like Joey Jordison because he's looked so bad at the plate.  But last night, the smoothness and balance to his swing suddenly came back. 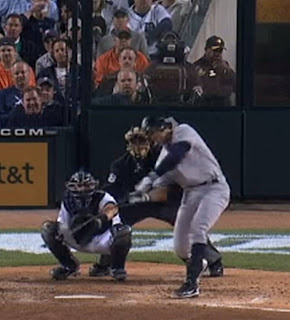 (Screen cap courtesy of MLB.com video)
Look at that.  The hips are rotated perfectly.  The arms are in time with the hip motion.  The weight is distributed perfectly.  And the timing is right on point with where the pitch was delivered.  That's the swing on his hit to lead off the inning, and the swing on his 2nd hit was just as pretty.  This is the swing we see when The Horse is on his game, and the 8th inning last night was the first time I remember seeing that swing since he came back.

Maybe this means the thumb isn't as bad as I thought.  Maybe it means that his other bumps and bruises are healed.  Maybe it means A-Rod really did just need to shake the rust off.  Whatever it means, the one thing we should all take from it is that The Horse might be starting to round back into form.  And if that's the case, his timing couldn't better.  A locked in Horse is a dangerous Horse, and it could spell good things for the rest of a lineup that started to stir last night.  I know I would not want to be in Doug Fister's cleats tomorrow night on the mound after seeing this take place last night.
Posted by Unknown at 12:19 PM No comments: 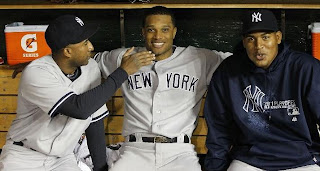 (All smiles when you win.  Courtesy of Getty Images)
You know what the best part of writing this recap is?  I'm not nearly as hung over as I anticipated because I didn't have to drink nearly as much to make it through the game.  Thanks, A.J.!

- I started getting a bad feeling that the jinx was on with TBS in the 1st inning when Brian Anderson stated that between the 2 teams, "only" Justin Verlander had better stuff than A.J.  Ummm, CC Sabathia, anybody?  Dave Robertson?  Benoit?  Scherzer?

- That was a pretty nice gallop by A-Rod to catch Santiago's pop-up bunt in the bottom of the 1st.  Did you see that stride??? Majestic.

- The beer was flowing heavily when A.J. loaded the bases, forced the bullpen to get up, and had Larry Rothschild come out to talk to him in the 1st.  If I were Rothschild, I would have just poked him in the eye, punched him in the sack, and walked back to the dugout.  In a related story, I would have been a terrible pitching coach.

- I almost had a heart attack/shit myself on C-Grand's diving/jumping catch of Don Kelly's liner to end the 1st inning.  If he doesn't catch that, that's 4 runs right there and probably the end of A.J.'s night.  The catch later will get all the headlines (and with good reason), but the importance of that 1st inning catch should not be understated.

- This was one of the earliest comments I made last night on The Official AB4AR Facebook Page, but I'll say it again.  The 7 combined pitches seen by Cano, A-Rod, Teix, and Swish in their first at-bats was fucking pathetic.  Just bad times all around.

- After a bad A.J. cameo in the 1st inning, he and Rothschild went to the clubhouse to talk/look at video/do something, and we were treated to Good A.J. in the 2nd.  His mechanics were much sharper, his delivery was smoother, and he threw just 10 pitches, 9 for strikes, to get out of the inning 1-2-3.  Whatever happened between him and Larry between the 1st and 2nd really set the tone for the rest of A.J.'s outing.

- Jeter finally put a good swing on a hittable pitch to drive in the first runs of the game in the 3rd inning.  Porcello left a sinker up and Jeter was right on the pitch.  Bonus point for Russell Martin for the hustle to score from first AAAAAAND the great slide to avoid Avila's tag.

- After a flawless first 2 innings, Porcello started to drift up in the zone with his pitches in the 3rd and 4th, and it got him into trouble.  He also couldn't locate his fastball inside to lefties and hit Teix and Jorge trying to work there.  Halfway through the 4th inning it looked like the wheels could fall off for Porcello at any minute.

- The A.J. Burnett Experience was in full effect in the 4th inning after a solid 3rd- He lost the zone, fell behind Victor Martinez, gave up a HR to him, gave up a double to Peralta (Bad A.J.), then recovered to strike out Avila and Wilson Betemit to end the inning (Good A.J.).  The back-to-back curveballs to Betemit were FILTHY.

- As lame as most commercials usually are during the postseason, the Geico commercial with the guinea pigs rowing a boat to power the dude's computer is absolutely fucking hilarious.  When he's talking about how he had to train the guinea pigs?  "Such a simple word.  'Row.'"  That's good stuff right there.

- Joe Girardi could teach a college course on bad bunting strategy.  Top 5th, 2 on, 0 out, Porcello teetering on the edge of falling apart, and Joe sends Jeter up to sac bunt the runners over.  Did Joe not watch Jeter's previous at-bat where he took Porcello to the DEEPEST PART OF THE PARK FOR A 2-RBI DOUBLE?!?!?!?!?!  And it was a terrible bunt that didn't even advance the runners, which is the risk you run when you take the bat out of people's hands.  Fuckin' A, man.  So stupid.

- The Yankees still managed to score in the inning, though, thanks to an awful pitch by Porcello to C-Grand.  Fastball that was supposed to be in ran right back over the plate and Curtis ripped it into right for a double.

- And not for nothing, but the sac fly by The Horse that scored the 4th run probably would have been a double if he was healthy.  That was another bad pitch by Porcello that caught too much of the plate.

- HUUUUUUGE bailout play by Ramon Santiago, swinging at the first pitch in the bottom of the 5th and grounding into a double play after Jackson's leadoff single.  That could have led to another path down the Bad A.J. Trail, but it was immediately erased.  What the hell was up with Jeter's throw to first, though?  All the time in the world and he basically bounced the thing halfway between 1st and 2nd.

- Miguel Cabrera looked a little bummed out after lining out to Jeter to end the 6th inning.  Somebody should have gotten him a drink.  HIIYOOOOOOOOOO!!!!