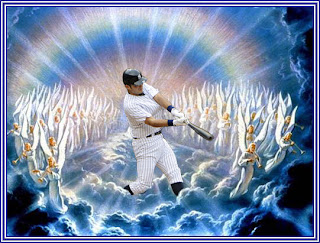 (New prospect list means time for a new Jesus Photoshop)
And prospect day continues here at AB4AR.  Probably as a way to temper the buzz that was sure to come once I started to drop hints about the AB4AR list, Baseball America has released their Top 10 Prospects list for the Yankees this year.  That list is as follows:

- No surprise in the top 3.  Montero, ManBan, and Betances are pretty much the unanimous top 3 across the board anywhere you look, which probably explains why every team is asking for at least 2 of them in any trade for a starter.

- I get Sanchez at 4, but I still think Austin Romine is being undervalued a bit because of his lower ceiling.  Sanchez is still a long ways away from the show; Romine has already been there.  In my book that makes him a higher-ranking prospect.

- In that same vein, I can understand being high on Bichette and Santana, but to rank them solidly in the top 10, ahead of Major League-ready guys like Romine, is a bit of stretch.  If BA really projects Romine as a .270 hitter with 10-15 HR and good defense in the Majors, that should be enough to rank him higher than 2 guys who have yet to play a full professional season.

- In THAT same vein, it's crazy to me how David Phelps and Adam Warren keep getting overlooked.  These are guys who have succeeded at every level of the Minors and could step in and pitch in the Majors tomorrow.  How that track record gets factored in less than a good short season is beyond me.

- With the inclusion of Santana, the Yankees are suddenly stacked with high-ceiling OF prospects.  Williams and Heathcott have been on the radar for a while, but now there's 3 guys in the top 10 who could be future CFers.  It should be interesting to see how fast or slow the Yankees move these 3 this year if they perform well, especially considering C-Grand's contract will be coming up in the near future.
Posted by Unknown at 2:30 PM No comments:

As the Yankees continue down their path of self-imposed penny pinching, focusing on the big picture and future benefits of cutting payroll for 2014 rather than the immediate benefits of signing someone like Roy Oswalt or Hiroki Kuroda, we Yankee fans and distinguished members of the Yankee blogosphere suddenly find ourselves in some unfamiliar territory.  By now we are (or should be) used to the Yankees not always getting their man during Hot Stove season.  But to see them take a backseat approach to the offseason proceedings and not really attempt to get any man or even make other teams think that they're trying to get their man?  That's Dimension X-level weirdness to many, and it's already starting to get to some of us.

Because we know the Yankees have needs.  They aren't glaring needs, but any relatively smart Yankee fan knows that this team has needs, mainly another big-time starter.  Cash himself came out and openly admitted that to us at his year-end press conference when he name dropped improving the rotation.  Sure, bringing back CC was a great move, and Freddy provides depth, but did bringing back 40% of 2011's rotation to join up with the remaining 60% really make the 2012 rotation any BETTER?  Probably not.  And we've been conditioned to expect big things when the Yankees make it known what their target areas of need are.  But this offseason we've seen them content to linger in the background, seemingly ignoring the very holes in their roster that Cash admitted they have while those who could conceivably fill those holes are snatched up by the competition.  This is frustrating.

The frustration, almost certainly rooted in our being conditioned to expect the Yankees to always get their guy, is understandable to a degree.  With the resources and money at their disposal, there is no reason that the Yankees couldn't have snatched up both C.J. Wilson and Yu Darvish, continued to pursue guys through a trade, and build a brand new mega-rotation.  But the Yankees appear to have decided to re-allocate their resources, namely the ones with the $$ signs, and plan for the future rather than address the present.  It's not a familiar strategy for us as fans to see play out.  New CBA or not, the Yankees are still the biggest dog in the uncapped MLB yard, and they shouldn't be letting the smaller, weaker dogs come up and steal their Kibble.  But that appears to be the path they're planning to take to achieve their future goals, which means we could have to get used to this kind of offseason for the next few years.

On the positive side, in focusing so much on controlling costs and moving further away from the quick-trigger, free-wheeling spending days of the early 2000s, the Yankees are setting the stage for their latest crop of young homegrown talent to step up and establish themselves, and that should be fun to watch.  With Bernie and Andy and Jorge gone, and Jeter and Mo closer to the ends of the playing careers than their primes, the core of the most recent dynasty is almost gone.  Now we get to see who can step up and replace them, who can live up to the hype, who can fly under the radar and surprise us, and who can start to build the foundation to the next great Yankee dynasty.

Will Manny Banuelos replace Andy as the big-game lefty in the rotation?  Will Mason Williams blossom into a new generation Bernie Williams 2.0?  We don't know.  But what we do know is that the Yankees aren't trading all these young assets off like baseball cards to fill the holes they don't fill through free agency anymore.  And if the Yankees aren't going to be the big spenders on the block for the foreseeable future, and aren't going to trade their youth for a quick fix, they are going to have to fill holes from within, which means it's very likely that many of these guys are going to get a real shot to become the next generation of Yankee greats.

It'll suck if the Yankees continue to be bystanders during the next few offseasons, no doubt.  But to be able to witness the potential beginning of the next generation of homegrown Yankee stars isn't a bad trade-off.  And while offseasons might not be quite as exciting as we're used to while the cash isn't being thrown around, the infuse of young talent and all the possibilities that lie with it should ensure that the next few seasons are exciting.
Posted by Unknown at 10:00 AM 1 comment:

I know I've been teasing this forever, and I teased it again yesterday on the Facebook page, but this time it's for real.  It's really happening.  No more dragging it out and promising dates and then missing them like Dr. Dre making the "Detox" album. The first ever AB4AR Top 30 Prospects list is done and it's coming out.  I sat down, did the research, ranked the players, and it's finally going to happen.  This is truly a Christmas miracle.

Starting next Tuesday, December 27th, the list will be unveiled in posts of 5 players per day.  It will conclude with the top 5 on January 3rd, pretty fitting with the whole "new year" theme.  Clearly I put a lot of thought into this.

So be on the look out for the Top 30 starting next week and prepare your comments for all the crummy choices I made and guys I left off.  That's what prospect lists are about, right?
Posted by Unknown at 7:48 AM No comments: