Full disclosure, I had no clue Robbie wasn't a US citizen.  But good for him and welcome to the club, bro.  I know this isn't about me, but I'm really glad that Robinson and I finally have something in common.  Up until today, it's been a steady string of polar opposites.  I'm a lazy, uncool, untalented, out-of-shape cubicle monkey making 5 figures doing something I'm really not even that good at; he's awesome, the best second baseman on the planet, in peak physical condition, oozes swag at every turn on and off the field, and stands to be paid somewhere safely inside the realm of 9 figures in his next contract once mega-shark agent Scott Boras squeezes every last penny out of some team (likely the Yankees) after the 2013 season.

So yeah, I'm glad Cano and I have some common ground now, a conversation starter.  I'm a citizen, he's a citizen.  So hit me up sometime, Robbie.  Maybe we could hang out.  And congrats again on making it official.  Now somebody cue the fucking music!

P.S.- Coulda done without the David Ortiz beard, Robbie.  I know it's the offseason and you can let the scruff go, but clean it up. 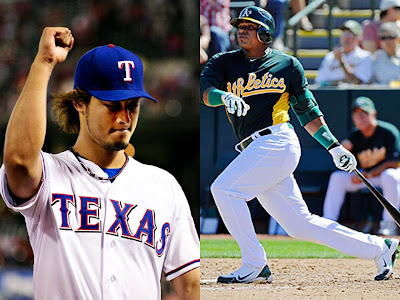 Not wanting to commit high dollars to 2 risky options that might not have returned comparable rewards, Cash decided to play it safe with his bids on each player and the Yankees lost out on both.  Darvish ended up in Texas and Cespedes in Oakland, and both of them finished in the top 3 of the AL Rookie of the Year vote yesterday, an award that they could have battled it out for had Mike Trout not come and blown everyone's doors off.  Now that their first years as Major Leaguers are over, let's take a look back and play a little "what if?" game with each guy.
Read more »
Posted by Unknown at 9:23 AM No comments: